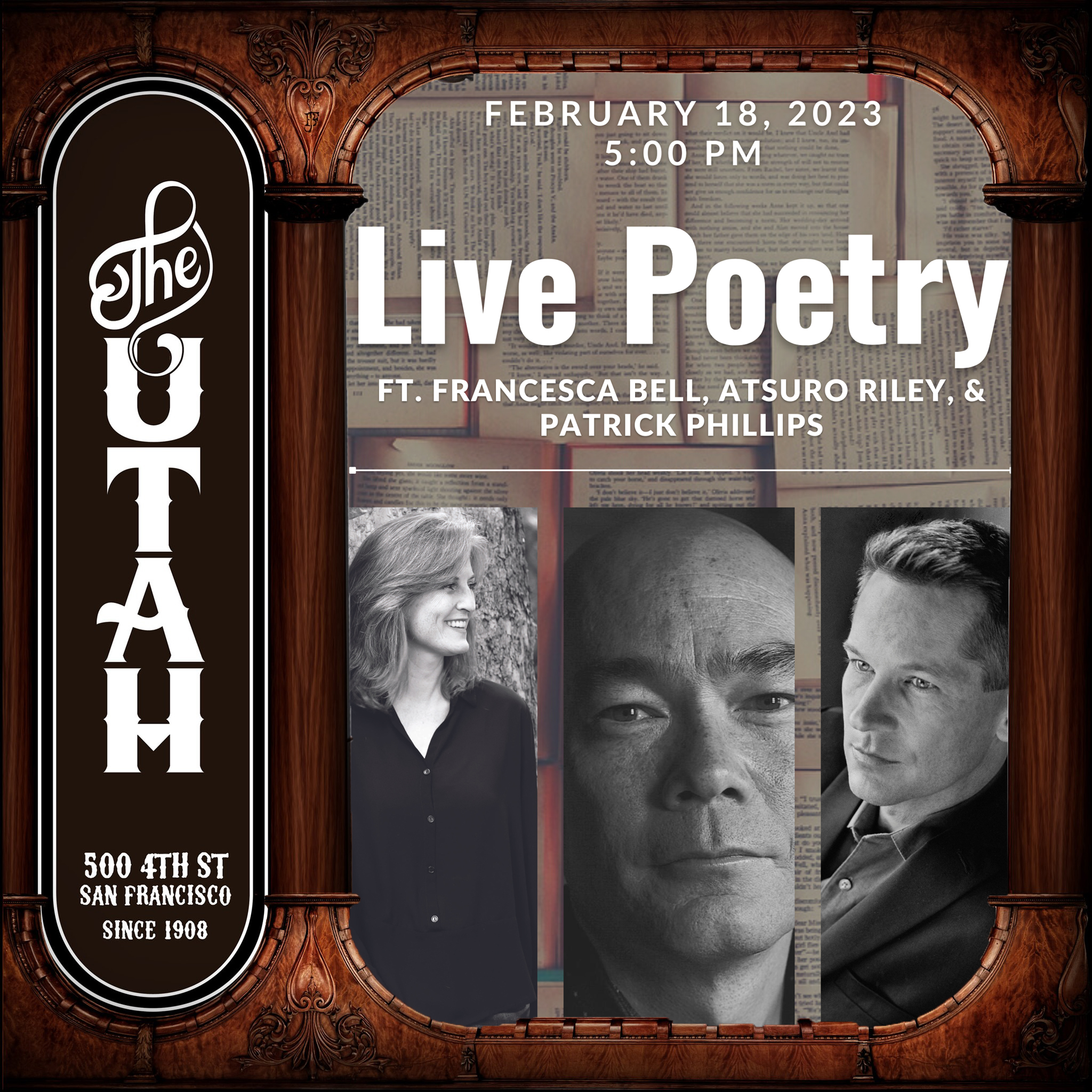 Join three incredible Bay Area poets at the famed Hotel Utah Saloon for an evening of live poetry!
Atsuro Riley is the author of Heard-Hoard (University of Chicago Press, 2021), winner of the Alice Fay di Castagnola Award from the Poetry Society of America, a finalist for PEN America’s Voelcker Poetry Award, a Boston Globe Best Book of 2021, and a Bookworm Top 10 Book of the Year.

His first book Romey’s Order was the winner of the Whiting Award, the Kate Tufts Discovery Award, The Believer Poetry Award, the Witter Bynner Award from the Library of Congress, and a Lannan Literary Award.

Riley is the editor of Revel, a literary journal. He lives in San Francisco.

Patrick Phillips is currently a fellow of the Cullman Center for Writers at the New York Public Library, as well as a Carnegie Foundation Fellow. His first book of nonfiction, Blood at the Root: A Racial Cleansing in America, was published by W. W. Norton and named a best book of the year by The New York Times, The Boston Globe, and Smithsonian. Elegy for a Broken Machine appeared in the Knopf Poets series in 2015, and was a finalist for the National Book Award. A past fellow of the National Endowment for the Arts and the Guggennheim Foundation,

Phillips is also the author of Chattahoochee, Boy, and Song of the Closing Doors, which is forthcoming from Knopf in 2022. His work has appeared in many publications, including The New York Times, The Wall Street Journal, and The Nation. Phillips lives in San Francisco and teaches writing and literature at Stanford.

Francesca Bell is a poet and translator. Her debut collection, Bright Stain (Red Hen Press 2019), was a finalist for the Washington State Book Award and the Julie Suk Award. Her work appears widely in literary journals, and she has received a Neil Postman Award for Metaphor from Rattle and an Honorable Mention in Nimrod’s Pablo Neruda Poetry Prize. Bell grew up in Washington and Idaho and did not complete middle school, high school, or college. She lives with her family in Novato, CA.