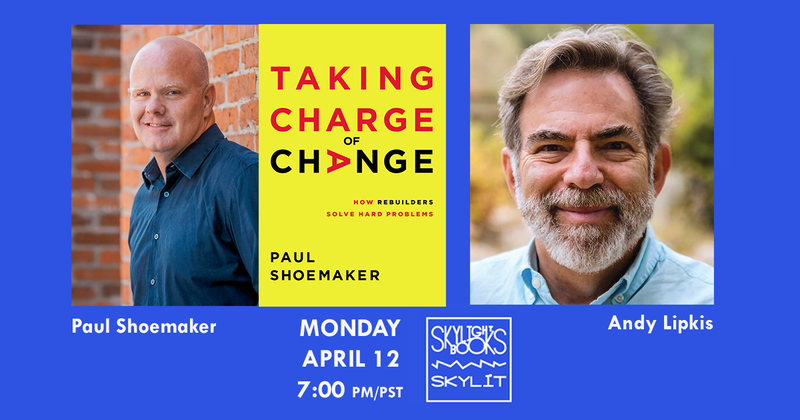 When social impact thought leader Paul Shoemaker was researching effective civic change, he discovered something surprising: What matters most today in driving real change is less about a certain set of programs and more about a different kind of leadership. It is leadership poised to meet the radically different challenges of this decade ahead, including historic levels of inequity, silos, division, and resource scarcity. While innovation is always good, more than invention and innovation what is needed most now is re-invention and renovation.

Using the metaphor of America’s deteriorating bridges, Shoemaker shows us in Taking Charge of Change that the structures and foundations of American communities and companies are in deep need of rethinking and rebuilding. Writing for socially conscious and civically active leaders who seek greater impact—in the private, public, and nonprofit sectors—Shoemaker profiles thirty-eight rock star change agents who he dubs Rebuilders. He distills what makes them so effective.

Featured leaders include Peter Drucker Award winner Rosanne Haggerty, whose goal is to end chronic homelessness; Trish Millines, who has changed lives for kids of color in high tech; and David Risher, whose cross-sector approach is helping solve global illiteracy.

Paul Shoemaker is the Founding President of Social Venture Partners International—a global network of thousands of social innovators, entrepreneurs, philanthropists, and business and community leaders that support social change agents in over 40 cities and 8 countries. With insights from over 17 years of this unique vantage point, as well as a decade prior at Microsoft and Nestlé and 5 years as a cross-sector consultant, he is a global thought leader and consultant on activating social change agents and increasing impact. In 2011 and 2012, Shoemaker was named one of the “Top 50 Most Influential People in the Nonprofit Sector” by The Non Profit Times, and in 2013, was named “Philanthropist of the Year” by Future in Review. In 2015, he received the 2015 Microsoft Alumni Integral Fellow Award. Over the last 5 years, he has consulted with a wide range of private, nonprofit and public sector entities on a range of challenges from leadership development to business modeling to long-term strategy. And he has spoken at TEDx and United Nations events and has written for theStanford Social Innovation ReviewandTheHuffington Post.

Andy Lipkis is a practical visionary who began planting trees to rehabilitate smog and fire damaged Los Angeles area forests when he was 15 years old. He founded TreePeople at age 18 and has served as its President since 1973. Across the country and around the world, Andy has addressed groups involved in the linked issues of environment, urban forestry, sustainability, water, and energy use. These include the United Nations, the U.S. Conference of Mayors, the U.S. Environmental Protection Agency, the U.K. National Urban Forestry Unit, the U.S. Forest Service,  the Australian National Science Foundation, American Society of Civil Engineers, among many others. Andy has been inducted into both the American Society of Landscape Architects and the Society of American Foresters.  Andy’s honors come from groups as diverse as the Daughters of the American Revolution, the Baha’i Faith, National Arbor Day Foundation, the California State Board of Forestry, and the South Coast Air Quality Management District. Andy and Kate Lipkis were named to the U.N. Environmental Programme’s Global 500 Roll of Honour. They also hold American Forests’ Lifetime Achievement Award. In 1991, President George H.W. Bush named TreePeople the 440th Point of Light. In 2007, Andy was named a Durfee Fellow, and in 2009 an Ashoka Fellow in recognition of his leadership as a social entrepreneur.