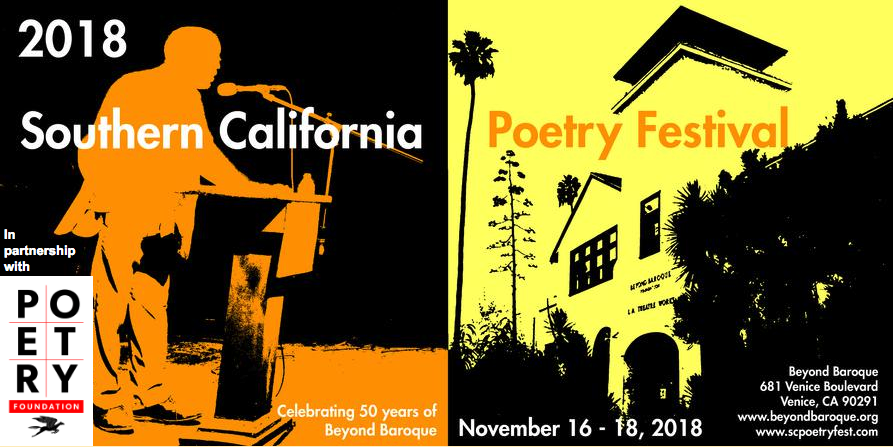 The SoCalPoFest is an annual poetry festival that relocates each year to a different Southern California community. For 2018, the third annual, the event will feature themed readings and workshops. The SoCalPoFest is dedicated to preserving the diversity of voices within our community, and this diversity extends across cultural lines and lines related to schools of poetic thought. We want to hear poetry from all who make a practice of it, regardless of poetic affiliation or cultural group.

Beyond Baroque Literary | Arts Center hosts this year’s Southern California Poetry Festival in celebration of its 50th anniversary, and in recognition of its long history of nurturing the poets and poetry of Los Angeles.

In partnership with: The Poetry Foundation, publisher of Poetry Magazine, is an independent literary organization committed to a vigorous presence for poetry in our culture. It exists to discover and celebrate the best poetry and to place it before the largest possible audience.

Since the festival is free of charge it is our policy to overbook for all readings and conversations. In the case of a full program, your free ticket may not guarantee admission. We recommend arriving early. Standby tickets will be released fifteen minutes prior to each program. 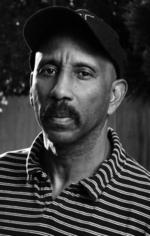 The 2018 SoCalPoFest opens with a reading and discussion that celebrates the work and influence of one of the region’s singular poets, Will Alexander. Legendary experimental poet Anne Waldman joins Alexander and interdisciplinary author, curator, and editor Janice Lee for a reading. A wide-ranging discussion focused on Alexander’s work and the avant-garde in language will follow. 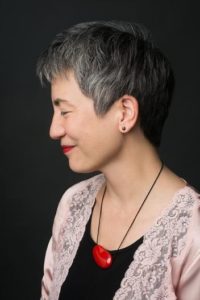 The Sensationally-Short Poem: Workshop with Kimiko Hahn — 10 AM to 12 PM @ Beyond Baroque

“In this generative workshop, you will write a number of poems, two of which will be workshopped. Towards that end, I will present various kinds of prompts. Revision possibilities will guide participants to try new craft options. By the end of the workshop, I predict you’ll have produced a gem.” —Kimiko Hahn

Kimiko Hahn, author of nine books, finds that disparate sources have given way to her work—whether black lung disease in Volatile, Flaubert’s sex-tour in The Unbearable Heart, exhumation in The Artist’s Daughter, or classical Japanese forms in The Narrow Road to the Interior. Rarified fields of science prompted her latest collections Toxic Flora and Brain Fever. A passionate advocate of chapbooks, her own most recent is Brood. Honors include a Guggenheim Fellowship, PEN/Voelcker Award, and Shelley Memorial Prize. Hahn is a distinguished professor in the MFA Program in Creative Writing & Literary Translation at Queens College, City University of New York. 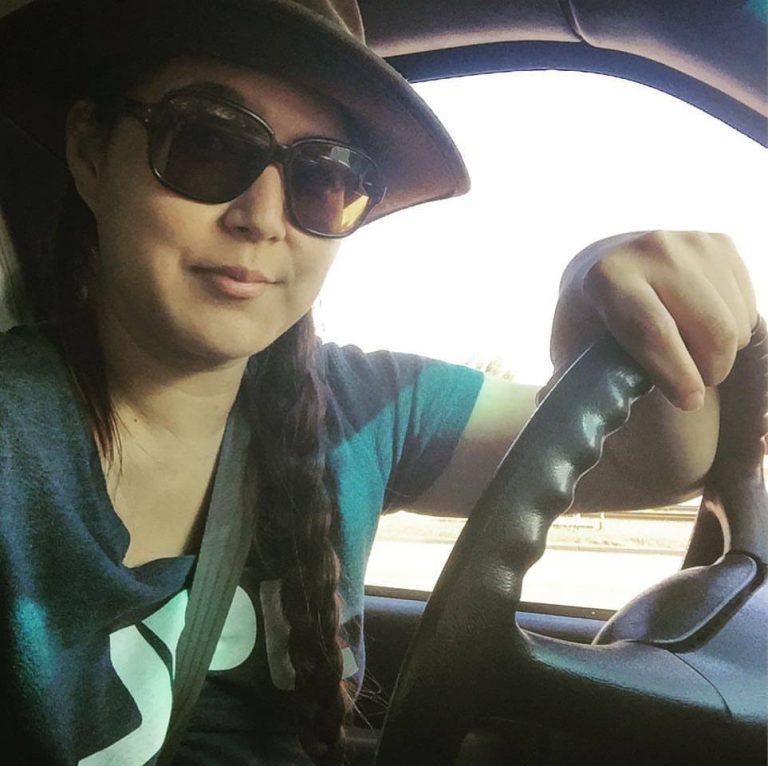 Co-Dependencies: Affected Bodies & the Poetic Languages of Personhood: Workshop with Janice Lee — 10 AM to 12 PM @ Beyond Baroque

“What really exists is not things made but things in the making.” —William James

How are the frames of reference and relationships between and of living beings (plant, animal, human) activated? That is, how do different bodies and worlds articulate each other, or, how do we learn to be affected? This workshop will explore notions of personhood and interspecies communication through exercises in seeing, writing, breathing, and sensing.

Janice Lee is the author of KEROTAKIS (Dog Horn Press, 2010), Daughter (Jaded Ibis, 2011), Damnation (Penny-Ante Editions, 2013), Reconsolidation (Penny-Ante Editions, 2015), and The Sky Isn’t Blue (Civil Coping Mechanisms, 2016). She writes about the filmic long take, slowness, interspecies communication, the apocalypse, and asks the question, how do we hold space open while maintaining intimacy? She is Founder & Executive Editor of Entropy, Co-Publisher at Civil Coping Mechanisms, Contributing Editor at Fanzine, and Co-Founder of The Accomplices LLC. She currently lives in Portland, Oregon where she is an Assistant Professor of Fiction at Portland State University. 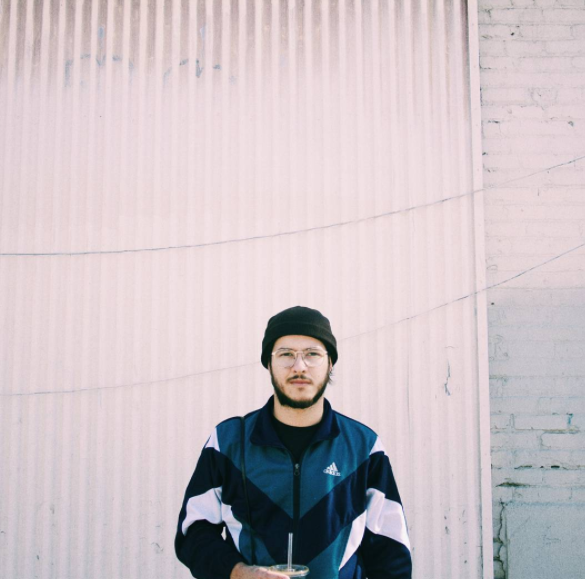 Pedro Paulo Araújo was born in Fortaleza, Brazil. He grew up living around the world in a total of seven different countries. From an early age, he developed a passion for storytelling. While growing up in countries of extreme poverty Pedro Paulo noticed that no matter the country’s financial situation or culture one thing remained: good stories change lives. He graduated from the New York Film Academy in Los Angeles with his bachelor’s of fine arts in filmmaking in 2015. Since then Pedro Paulo has written and directed several commercials, music videos, documentary and short films for major clients like Pepsi and artists like Lil Jon, Becky G, Akon, Wisin, and other music chart ruling artists. His short film Blur played at the 69th Cannes Film Festival in France and won other prestigious film festival awards. His music videos have also been nominated for awards and have reached millions of views on YouTube and other online platforms. They have also been featured on Top 10 charts of world-famous television channels. Pedro Paulo currently lives in Los Angeles, California and works at 2 Wolves Films and La Maraca.

The NEW Series — 8 PM @ Beyond Baroque

Three poets read original work commissioned for the festival on the theme of “Writing the Future.” Followed by a discussion with the authors moderated by Victoria Chang. 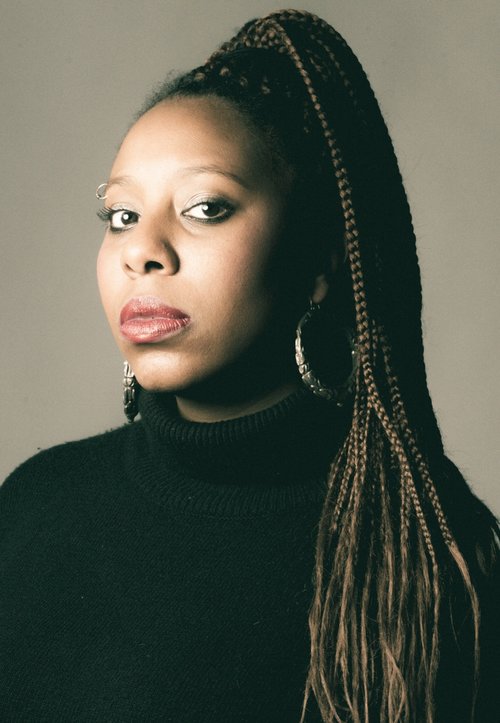 Morgan Parker is the author of There Are More Beautiful Things Than Beyoncé and Other People’s Comfort Keeps Me Up at Night. In 2019, Tin House will publish her third collection of poems, Magical Negro, and her young adult novel, Who Put This Song On?, will be published by Delacorte Press. Her debut book of nonfiction will be released in 2020 by OneWorld. Parker is the recipient of a 2017 National Endowment for the Arts Literature Fellowship, winner of a Pushcart Prize, and is a Cave Canem graduate fellow. She is the creator and host of Reparations, Live! at the Ace Hotel. With Tommy Pico, she co-curates the Poets with Attitude (PWA) reading series, and with Angel Nafis, she is The Other Black Girl Collective. She lives in Los Angeles. 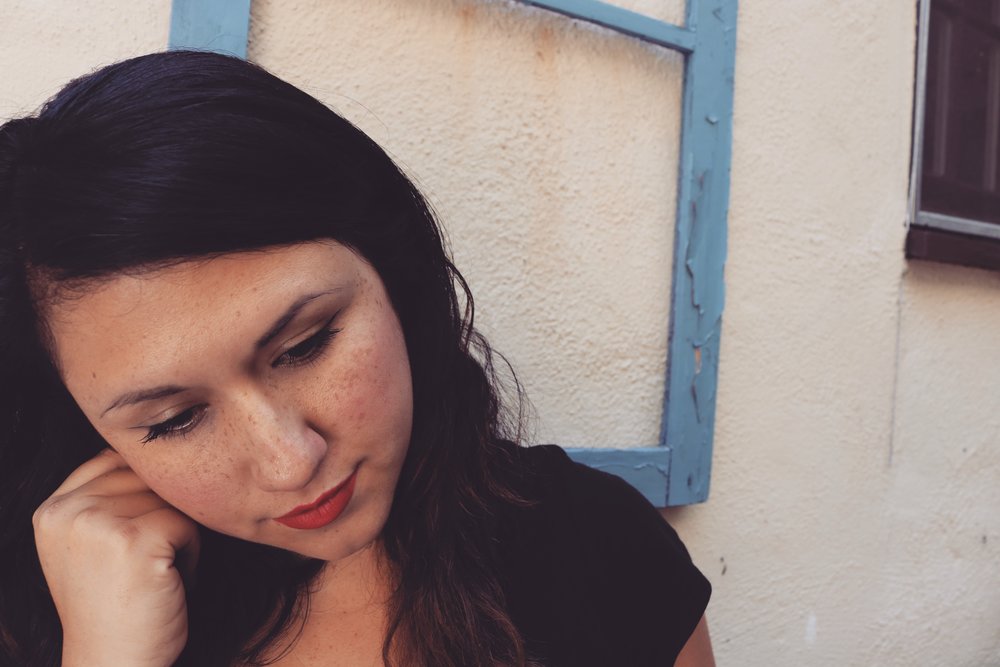 Vanessa Angélica Villarrealwas born in the Rio Grande Valley borderlands to formerly undocumented Mexican immigrants. She is the author of the collection Beast Meridian (Noemi Press, Akrilica Series, 2017), winner of the John A. Robertson Award for Best First Book of Poetry from the Texas Institute of Letters, and featured as a best-of book at The Los Angeles Times, NBC News, BOMB, Literary Hub, Bustle, and Entropy. Her work has appeared or is forthcoming in The Rumpus, The Boston Review, The Academy of American Poets, BuzzFeed, Epiphany, PBS Newshour, and elsewhere. She is a CantoMundo Fellow, and is currently pursuing her doctorate in English Literature and Creative Writing at the University of Southern California in Los Angeles, where she is raising her son with the help of a loyal dog.

Participants explore how their creative and artistic practices energize their dive into personal/social Vertigo to achieve “composure in the crossroads,” and to “dance with disorientation,” in order to forge from ecstatic insight poetry of witness, resistance, testimony, and whole living. Participants bring: drafts of two poems; and one poem by another writer; poems should address challenging personal circumstances or social issues in language that summons ecstatic insight.

Peter J. Harris, winner of the City of LA’s 2017-18 COLA Fellowship, is the author of Bless the Ashes (Tia Chucha Press), winner of the 2015 PEN Oakland Josephine Miles Award; and The Black Man of Happiness: In Pursuit of My ‘Unalienable Right’, a book of personal essays, winner of a 2015 American Book Award. Since the 1970s, Harris has published his work in a wide variety of publications, most recently in Voices from Leimert Park, Redux, edited by Shonda Buchanan; Wide Awake: Poets of Los Angeles and Beyond, edited by Suzanne Lummis; Altadena Poetry Review: Anthology, edited by Thelma T. Reyna, Poet Laureate of Altadena; and Coiled Serpent: Poets Arising from the Cultural Quakes & Shifts in Los Angeles, edited by Neelanjana Banerjee, Daniel A. Olivas, and Ruben J. Rodriguez. Since 1992, he’s been a member of the Anansi Writers Workshop at the World Stage, in LA’s Leimert Park.

Morning Workshop: With Jeffrey Schultz — 10 AM to 12 PM @ Beyond Baroque

“A Robust Ignorance: Navigating the Turns of Image and Abstraction”

As a category, image has generally come to be considered so central to the art of poetic composition that many poets take its centrality for granted, a position that risks slipping passively into dogma. Meanwhile, the moment to moment realities of our lives are structured more and more every day by abstractions and virtualities. This workshop will explore the tensions and points of rupture between images and abstract ideas with the end goal of leaving us better equipped to address the enormous and complex forces—for instance climate change, globalization, and all manner of other social, legal, and historical structures of thought—that have at this moment become so decisive to the questions of human history and the possibilities for a human future.

Jeffrey Schultz is the author of two National Poetry Series Selections: Civil Twilight (Ecco, 2017), and What Ridiculous Things We Could Ask of Each Other (Georgia, 2014). His poems have appeared in Poetry, TriQuarterly, and Boston Review, and on Poetry Daily, PBS NewHour’s Art Beat, and the Academy of American Poets’ Poem-a-Day. He’s received the “Discovery”/Boston Review Prize and a Ruth Lily Fellowship. A Visiting Assistant Professor of Creative Writing at Pepperdine University, he lives in Los Angeles with his wife and a seemingly ever-increasing number of rescue animals.

Youth Programming: With Nicelle Davis — 11 AM to 2 PM @ Beyond Baroque

This is a hands-on workshop. Writers will generate new works of visual and textual art. We will examine how the techniques used in collages can be applied to the craft of poetry. Poetry, like collage, requires multiple layers to suggest countless realities. By learning and executing the techniques used in other art forms, a treasury of poetry can be unearthed from a poet’s subconscious. By actively seeking to balance the right and left hemispheres of the brain during the creation process, writer’s block can be obviated. Through positive feedback and constructive criticism of the work made in class, every participant will acquire editorial skills.

Writers interested in participating in the open mic can practice reading their poem and learn how to best present their work to an audience.

Nicelle Davis is a California poet, collaborator, and performance artist who walks the desert with her son J.J. in search of owl pellets and rattlesnake skins. Her poetry collections include The Walled Wife (Red Hen Press, 2016), In the Circus of You (Rose Metal Press, 2015), Becoming Judas (Red Hen Press, 2013), and Circe (Lowbrow Press, 2011). Her poetry film collaborations with Cheryl Gross have been shown across the world. She has taught poetry at Youth for Positive Change, an organization that promotes success for youth in secondary schools, MHA, Volunteers of America in their Homeless Youth Center, and with Red Hen’s WITS program. She is the creator of The Poetry Circus and collaborator on the Nevermore Poetry Festival.