Join PBS SoCal and The Last Bookstore to celebrate the nation’s 100 most-loved novels. Inspired by the PBS series The Great American Read, the evening will feature exclusive clips, discussions with author Lisa See and Eliyannah Yisrael, a local subject from the series, and a special performance by Impro Theatre’s hilarious “Jane Austen UnScripted.”

About the series: The Great American Read is an eight-part series designed to spark a national conversation about reading. Americans across the country are encouraged to vote for “America’s Favorite Novel,” based off a predetermined list of 100 books.

Lisa See is the New York Times bestselling author of Snow Flower and the Secret Fan, Peony in Love, Shanghai Girls, Dreams of Joy, China Dolls, and most recently, The Tea Girl of Hummingbird Lane. Booklist has said of the new novel, “See’s focus on the unbreakable bonds between mothers and daughters, by birth and by circumstance, becomes an extraordinary homage to unconditional love.” Ms. See has also written a mystery series that takes place in China, as well as On Gold Mountain, which is about her Chinese-American family. Her books have been published in 39 languages. Ms. See was honored as National Woman of the Year by the Organization of Chinese American Women in 2001, was the recipient of the Chinese American Museum’s History Makers Award in 2003, and is slated to receive the Golden Spike Award from the Chinese Historical Society of Southern California in 2017.

Ms. See wrote the libretto for Los Angeles Opera based on On Gold Mountain, which premiered in June 2000. That same year, she also curated the exhibition On Gold Mountain: A Chinese American Experience at the Autry Museum. Ms. See then helped develop and curate the Family Discovery Gallery at the Autry Museum, an interactive space for children and their families that focused on Lisa’s bi-racial, bi-cultural family. The installation was up for twelve years. In 2003, she curated the inaugural exhibition—a retrospective of artist Tyrus Wong—for the grand opening of the Chinese American Museum in Los Angeles. In addition, she designed a walking tour of L.A.’s Chinatown and wrote the companion guidebook for Angels Walk L.A. to celebrate the opening of the MTA’s Chinatown station. As a longtime trustee on the University of California Press Foundation, she endowed the Lisa See Endowment Fund in Southern California History and Culture.

Eliyannah Amirah Yisrael graduated from Chicago State University with a BA in Communications, Media Arts and Theatre. She continued her studies in Loyola Marymount University’s MFA Production Program where she was hand-selected by Dean Teri Schwartz to represent the program as an intern with Participant Media.

In addition to directing and producing independent projects for over 10 years, Eliyannah has worked on films and episodic material for Sony, FOX, NBC, HBO, Lionsgate, ABC/Disney, and Warner Brothers among others including Divergent, Empire, Westworld, and Crazy Ex-Girlfriend.

Eliyannah is a Black girl from Chicago who was supposed to stay inside her box. Instead, she decided to dream big and change the world through visual storytelling. Her inspiration stems from the dramatic artistry of Elia Kazan, the personal and epic style of Ryan Coogler and Christopher Nolan, and the imaginative experimentation of Robert Zemeckis and George Lucas.

This is most evident in her acclaimed web series Hermione Granger and the Quarter Life Crisis. Eliyannah seeks to continue telling stories centered around POC through her production company, Sunshine Moxie Entertainment. 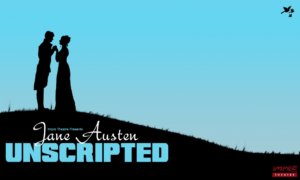 Jane Austen wrote only six novels, but her wit and wisdom left readers pining for more. Impro Theatre’s Jane Austen UnScripted gives audiences a chance to imagine the other books she might have written. The company deftly creates a world of love-struck girls, brooding noblemen and charming cads, and although hearts are sure to be broken, true love will win out in the end.

“One of the funniest evenings in town…An amazing comedy troupe spins an entire play into comedy gold right before your eyes.” —Los Angeles Times Magazine

“SENSATIONAL… smash hit… ingenuity, imagination, and hilarity… improv artists at the top of their field… MUST SEE.” —Stage-Scene LA 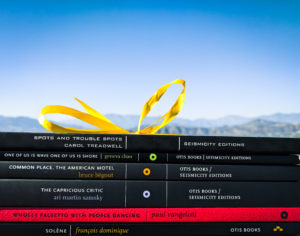 BookSwell was chosen to participate with other literary organizations in partnership with the PBS SoCal Reads event. Come by our table on the second floor during the event to learn about all the author events happening in Los Angeles. One new subscriber to the BookSwell newsletter will be chosen to win a bundle of good reads from Otis Books, the independent press at Otis College of Art and Design.

publishes contemporary fiction, non-fiction, and poetry, with special interests in translation and writing from and about Los Angeles. MFA Writing students are involved in all aspects of the press’ activities, from selecting and editing manuscripts to designing and typesetting books, managing production, and getting our titles out into the world. Peruse the Otis Books catalog, and purchase through Small Press Distribution.