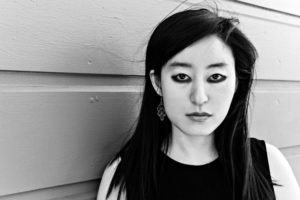 R.O. Kwon’s first novel, The Incendiaries, is forthcoming from Riverhead (U.S.) and Virago (U.K.) in July of 2018. She is a National Endowment for the Arts Literature Fellow. Her writing has appeared in The Guardian, Vice, BuzzFeed, Noon, Time, Electric Literature, Playboy, San Francisco Chronicle, and elsewhere. 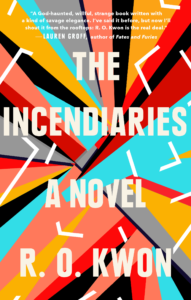 A powerful, darkly glittering novel of violence, love, faith, and loss, as a young woman at an elite American university is drawn into acts of domestic terrorism by a cult tied to North Korea.

Phoebe Lin and Will Kendall meet their first month at prestigious Edwards University. Phoebe is a glamorous girl who doesn’t tell anyone she blames herself for her mother’s recent death. Will is a misfit scholarship boy who transfers to Edwards from Bible college, waiting tables to get by. What he knows for sure is that he loves Phoebe.

Grieving and guilt-ridden, Phoebe is increasingly drawn into a religious group–a secretive extremist cult–founded by a charismatic former student, John Leal. He has an enigmatic past that involves North Korea and Phoebe’s Korean American family. Meanwhile, Will struggles to confront the fundamentalism he’s tried to escape, and the obsession consuming the one he loves. When the group bombs several buildings in the name of faith, killing five people, Phoebe disappears. Will devotes himself to finding her, tilting into obsession himself, seeking answers to what happened to Phoebe and if she could have been responsible for this violent act.

The Incendiaries is a fractured love story and a brilliant examination of the minds of extremist terrorists, and of what can happen to people who lose what they love most. (from Riverhead Books)

“A dark, absorbing story of how first love can be as intoxicating and dangerous as religious fundamentalism.” —The New York Times

“The Incendiaries probes the seductive and dangerous places to which we drift when loss unmoors us. In dazzlingly acrobatic prose, R.O. Kwon explores the lines between faith and fanaticism, passion and violence, the rational and the unknowable.” —Celeste Ng, New York Times-bestselling author of Little Fires Everywhere and Everything I Never Told You

They’d have gathered on a rooftop in Noxhurst to watch the ­explosion. Platt Hall, I think, eleven floors up: I know his ego, and he’d have picked the tallest point he could. So often, I’ve imagined how they felt, waiting. With six minutes left, the slant light of dusk reddened the high old spiresof the college, the level gables of its surrounding town. They poured festive wine into big-bellied glasses. Hands shaking, they laughed. She would sit apart from this reveling group, cross-legged on the roof’s west ledge. Three minutes to go, two, one. …

R.O. Kwon reads from her debut novel The Incendiaries, with Jade Chang

“Interview with R.O. Kwon, Author of The Incendiaries” with Jimin Han in Hyphen

“4 Writers to Watch This Summer” in The New York Times

“A Facade of a Woman: R.O. Kwon’s The Incendiaries” by Christine No in The Rumpus

“A New Anthology of Asian American Writing Asks What Home Even Means” by R.O. Kwon in Electric Lit

“The Truest I Could Be: Q&A with The Ensemble author Aja Gabel” by R.O. Kwon in Zyzzyva