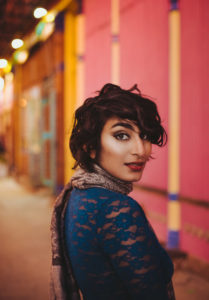 Fatimah Asghar is a nationally touring poet, screenwriter, educator and performer. Her work has appeared in many journals, including POETRY Magazine, Gulf Coast, BuzzFeed Reader, The New York Times, The Margins, The Offing, Academy of American Poets, and many others. Her work has been featured on news outlets like PBS, NPR, Time, Teen Vogue, Huffington Post, and others.

In 2011 she created a spoken word poetry group in Bosnia and Herzegovina called REFLEKS while on a Fulbright studying theater in post-genocidal countries. She is a member of the Dark Noise Collective, a 2017 Ruth Lilly and Dorothy Sargent Rosenberg Fellowship recipient, and a Kundiman Fellow. Her chapbook After came out on Yes Yes Books in 2015. She is the writer and co-creator of Brown Girls, an Emmy-nominated web series that highlights friendships between women of color. Her debut book of poems, If They Come For Us, is forthcoming on One World/ Random House, Summer 2018.

If They Come for Us 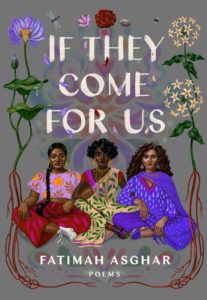 Poet and co-creator of the Emmy-nominated web series Brown Girls captures her experience as a Pakistani Muslim woman in contemporary America, while exploring identity, violence, and healing.

an aunt teaches me how to tell
an edible flower
from a poisonous one.
just in case, I hear her say, just in case.

This imaginative, soulful debut poetry collection from One World/ Random House captures the experiences of being a young Pakistani Muslim woman in contemporary America. Orphaned as a girl, Fatimah Asghar grapples with coming of age and navigating questions of sexuality and race without the guidance of a mother or father. These poems at once bear anguish, joy, vulnerability, and compassion, while exploring the many facets of violence: how it persists within us, how it is inherited across generations, and how it manifests itself in our relationships. In experimental forms and language both lyrical and raw, Asghar seamlessly braids together marginalized people’s histories with her own understanding of identity, place, and belonging. (from One World)

“A debut poetry collection showcasing both a fierce and tender new voice.” —Booklist

“‘Brown Girls’ is a new show unlike any you’ve ever seen. We talked to the woman behind it” with Isha Aran in Splinter

“Brown Girls Is the Show About Women, Friendship and Love You’ve Been Waiting For” by Lakshmi Ramgopal in Jezebel

“If They Should Come for Us” in POETRY

Three Poems in The Rumpus