Home »Event »YOU DOWN FOR THE CAUSE OR WHAT? Writers of color discuss allyship, featuring Sehba Sarwar, Tanya Ko Hong, Lisbeth Coiman, and Chris L. Terry

YOU DOWN FOR THE CAUSE OR WHAT? Writers of color discuss allyship, featuring Sehba Sarwar, Tanya Ko Hong, Lisbeth Coiman, and Chris L. Terry 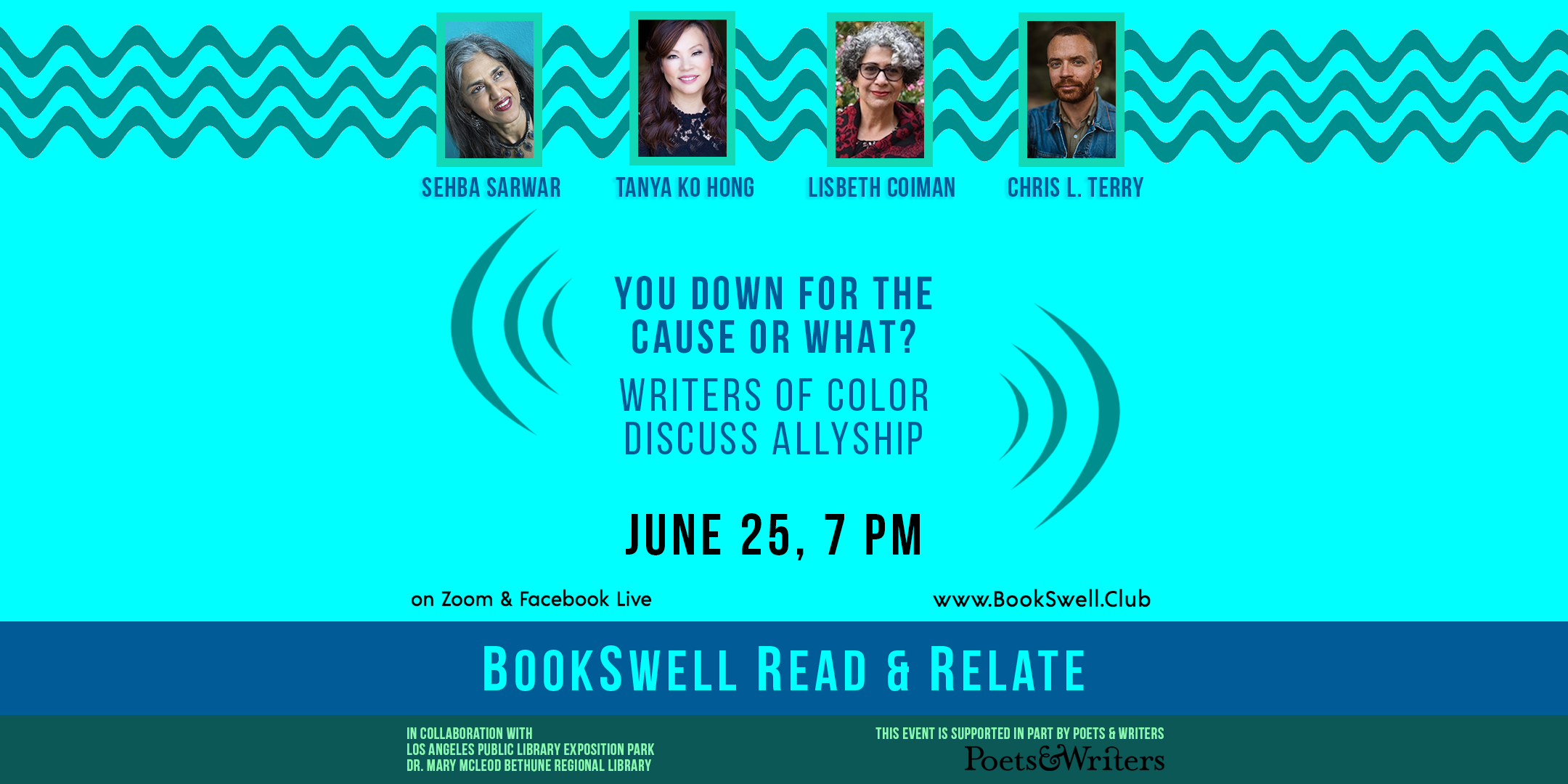 The Black Lives Matter uprising has inspired people around the world to take to the streets and demand justice and transformational change. Companies and organizations are issuing statements of support. Social media is deluged with posts in support of the movement.

As writers, it’s imperative that we pose penetrating questions not just to others but within ourselves and strive toward honesty and change, even when issues are hidden and obscured.

At this gathering, writers will share their work and create space to discuss questions such as: Has the US has entered a new era of allyship? Has a new generation committed to an anti-racist future? Or are we seeing performative allyship that will fade away with the next news cycle?

In a literary reading featuring Sehba Sarwar, Tanya Ko Hong, Lisbeth Coiman, and Chris L. Terry will raise questions and reflect on what it means to be an ally and how writers of color can generate and examine their work in the context of a larger movement. Audience members are encouraged to bring quotes from Black authors to share in the chat.

The event is free to attend via Zoom, Facebook Live, and YouTube. All proceeds from pay-what-you-will Eventbrite tickets will be dispersed to Black Lives Matter LA. In addition, the organizers will share direct links to donate to a short list of other social justice organizations.

About the BookSwell Read and Relate series
To keep connections alive between readers and writers during troubled times, BookSwell is organizing Read & Relate, a virtual video chat salon celebrating books, writers, and the literary life.

We’ll be using Zoom to conduct the salon and the feed will also be shared via Facebook Live and YouTube. Audio and video may be recorded and re-shared via BookSwell’s social media channels.

Proceeds from donating through the links below will go to Black Lives Matter LA. Contributions are not tax-deductible.

Chris L. Terry is the author of the novel Black Card, about a mixed-race punk bassist with a black imaginary friend. NPR called Black Card, “hilariously searing” and listed it as one of the best books of 2019. Terry’s debut novel Zero Fade was on Best of 2013 lists by Slate and Kirkus Reviews, who called it, “Original, hilarious, thought-provoking, and wicked smart…not to be missed” in a starred review.

Terry was born in 1979 to a black father and white mother. He lives in Los Angeles, where he teaches creative writing. His work has appeared in Best Small Fictions 2015, PANK, Very Smart Brothas/The Root, Apogee, Razorcake, and more.

Lisbeth Coiman is an emerging, bilingual writer who has wandered the immigration path from Venezuela to Canada, to the US. In her self-published memoir, I Asked the Blue Heron, Coiman explores the intersection between immigration and mental health. She is a bilingual writer and adult educator living in Los Angeles and her work has been published in Acentos Review, Entropy, Lady/Liberty/Lit, Hip Mama Magazine, Rabid Oaks, Cultural Weekly, and elsewhere online, and most recently in print in the Altadena Literary Review, and Accolades: a Women Who Submit Anthology. She featured in the 2015 Listen to Your Mother Show with her piece, The Violin. She lives in LA where she works and dances salsa and teaches adult ESL for the LAUSD district.

Tanya (Hyonhye) Ko Hong is a internationally published poet, translator, and cultural-curator who champions bilingual poetry and poets. Born and raised in Suk Su Dong, South Korea, she immigrated to the US at the age of eighteen. She is the author of five books: The War Still Within (KYSO Flash Press, 2019), Mother to Myself: A collection of poems in Korean (Prunsasang Press, 2015), Yellow Flowers on a Rainy Day (Oma Books, 2003), Mother’s Diary of Generation (Qumran, 2002), and Generation One Point Five (Esprit 1993). Find out more at www.tanyakohong.com

Sehba Sarwar creates essays, stories, poems, and art that tackle displacement, migration, and women’s issues. Her essays and poems have appeared in publications including New York Times Sunday Magazine, Creative Time Reports, Asia: Magazine of Asian Literature and elsewhere. Her short stories are anthologized by Feminist Press, Akashic Books, and Harper Collins India, and the second edition of her novel, Black Wings, was released in 2019 (Veliz Books). Sarwar’s papers are archived at the University of Houston’s library, and she is the member of Macondo Writers Workshop. Born and raised in Karachi, Pakistan in a home filled with artists and activists, Sarwar resides in Los Angeles and was awarded a 2019-20 individual artist grant by the Pasadena Arts and Cultural Affairs Division for her memoir-in-progress.