Year by Year Poems: a Reading by Lynne Sachs 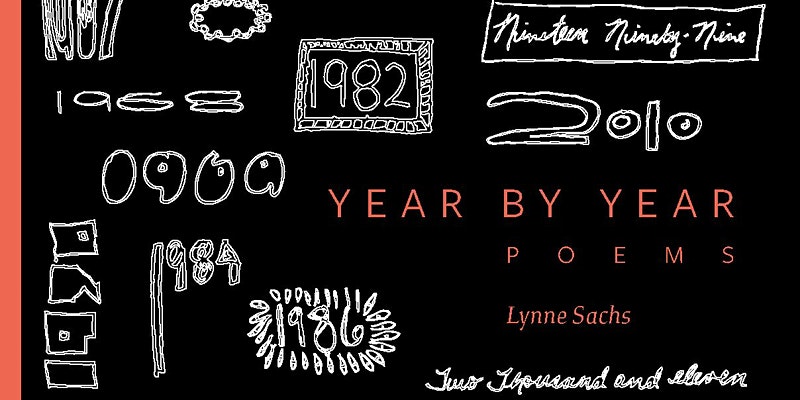 Acclaimed filmmaker and poet Lynne Sachs reads from her debut collection, Year by Year Poems, and shares some of her recent short films.

When filmmaker Lynne Sachs turned fifty, she dedicated herself to writing a poem for every year of her life, so far. Each of the fifty poems investigates the relationship between a singular event in Sachs’ life and the swirl of events beyond her domestic universe. Published by Tender Buttons Press, Year by Year Poems juxtaposes Sachs’ finished poems, which move from her birth in 1961 to her half-century marker in 2011, with her original handwritten first drafts. In this way, she reveals her process of navigating within and alongside historical events such as the Moon Landing, the assassination of Martin Luther King, Jr., streaking, the Anita Hill hearings, the Columbine shootings, and controversies around universal health care. In Year by Year Poems, Lynne Sachs realizes the long anticipated leap from her extraordinary career in filmmaking to this, her first book of poems. With an introduction by Paolo Javier, former Queens Poet Laureate and author of Court of the Dragon, and book design by Abby Goldstein.

Praise for Year by Year Poems:

“The whole arc of a life is sketched movingly in this singular collection. These poems have both delicacy and grit. With the sensitive eye for details that she has long brought to her films, Lynne Sachs shares, this time on the page, her uncanny observations of moments on the fly, filled with longings, misses, joys and mysterious glimpses of a pattern of meaning underneath it all.”

–– Phillip Lopate, author of Portrait of My Body and Against Joie de Vivre

–– Claire Messud, author of The Woman Upstairs and When the World Was Steady

“In Year by Year, Lynne Sachs selects and distills from larger fields of notation, acute scenes representing her life and the world she was born into. Her measured, spare account brings her to an understanding and acceptance of the terrible and beautiful fact that history both moves us and moves through us, and, more significantly, how by contending with its uncompromising force, we define an ethics that guides our fate.” – Michael Collier author of Dark Wild Realm

“Renowned experimental documentary filmmaker Lynne Sachs wrote one of 2019’s best books of poetry. In 2011, after deciding to write one poem for each of the fifty years of her life, Sachs asked herself, “How have the private, most intimate moments of my life been affected by the public world beyond?” The graceful, diaristic poems that she went on to produce successfully distill events and themes in the poet’s life and simultaneously, magically, reflect larger movements of history and culture. Intimate and imagistic, the poems unfold a series of miniature stories with sensuous rhythms, telling visual detail, and gentle humor. Thus, in “1969” a young Sachs imagines Neil Armstrong calling on the telephone, then turning “to look at all of us (from the moon).” This beautifully designed book includes facsimiles of many of the poetry’s initial drafts, which subtly illumine this artist’s creative process.” – John Smalley, 2019 Staff Pick, San Francisco Public Library, Poetry Librarian

“As an artist, Sachs keeps playing, again and again, with each of the thirty-three films she has made over the decades and now, with her first book of poems, which are just as inventive and fresh, just as delightfully playful with form. These poems are innovative but never intimidating or deliberately opaque. Instead, they invite us in, encouraging us to play along. They give us a structure to enter into our own retrospective lives, our own distillations of time, our own superimpositions of the newsworthy world onto our most intimate moments.” – Sharon Harrigan, Cleaver: Philadelphia’s International Literary Magazine (excerpt)

“Powerful collection! We’re loving Year by Year, a rich poetry collection and visual journey of ideas by filmmaker Lynne Sachs. The book includes original handwritten first drafts with each finished piece. Unique process immersion. Fascinating to view the first drafts with the complete pieces, exploring them together like a map, what is gained (& lost) as we move through time and ideas. Elegant and elegiac.” – Margot Douaihy, Northern New England Review (posted in Twitter)

“The poems of Year by Year led Sachs to create a feature-length hybrid documentary called ‘Tip of My Tongue”, an indication of how richly resonant these poems are, with their skillful intermingling of private and public.” – John Bradley, Rain Taxi (championing aesthetically adventurous literature)

Lynne Sachs makes films and writes poems that explore the intricate relationship between personal observations and broader historical experiences. Her work embraces hybrid form and combines memoir with experimental, documentary, and fictional modes. In recent years, she has expanded her practice to include live performance with moving image. Lynne was first exposed to poetry by her great aunt as a child in Memphis, Tennessee. Soon she was frequenting workshops at the local library and getting a chance to learn from poets like Gwendolyn Brooks and Ethridge Knight. As an active member of Brown University’s undergraduate poetry community, she shared her early poems with fellow poet Stacy Doris. Lynne later discovered her love of filmmaking while living in San Francisco where she worked with artists Craig Baldwin, Bruce Conner, Barbara Hammer, Carolee Schneeman, and Trinh T. Minh-ha. Lynne has made thirty-five films which have screened at the New York Film Festival, the Sundance Film Festival, the Museum of Modern Art, the Whitney Museum of American Art, the Walker Art Center, and the Wexner Center for the Arts. Festivals in Buenos Aires, Beijing and Havana have presented retrospectives of her work. Lynne received a 2014 Guggenheim Fellowship. In early 2020, her newest movie, Film About a Father Who, will premiere on opening night at the Slamdance Film Festival and in NYC at the Museum of Modern Art. Lynne lives in Brooklyn. Year by Year Poems is her first book of poetry.