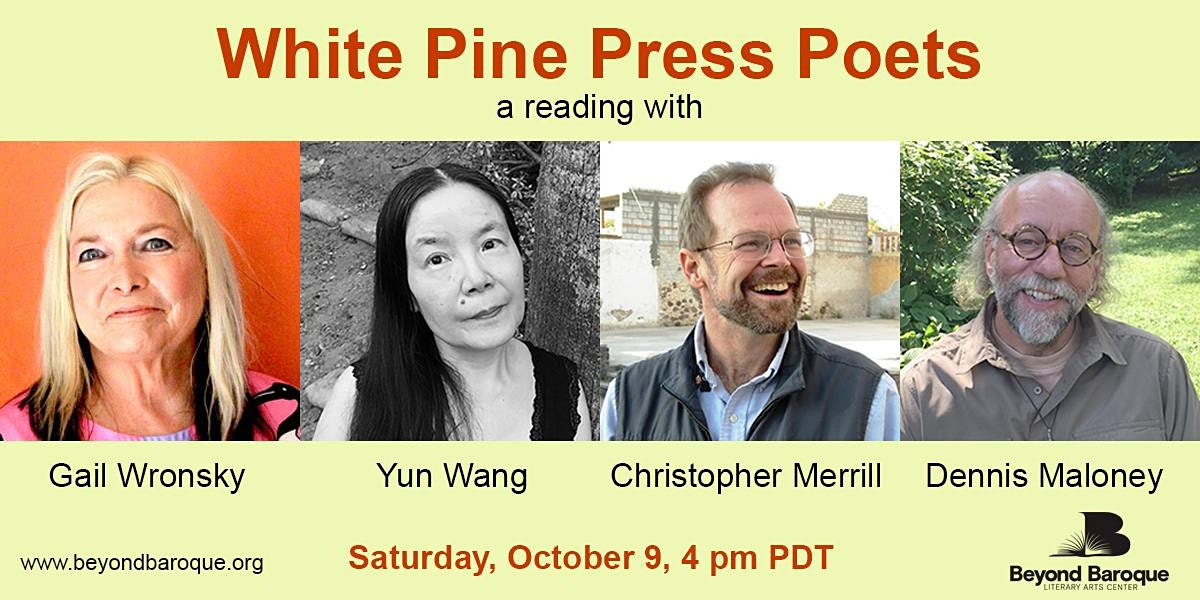 Christopher Merrill’s latest book, Flares, is a cross-genre text praised for its richly imagined fables, vignettes, and prose poems that reveal the elementary strangeness of this world. The book was published in Spring of 2021. Gail Wronsky’s latest poetry collection, Under the Capsized Boat We Fly, New & Selected Poems, published earlier this year, too, collects over forty years of the author’s work which explores environmentalism, and mortality in language that is both multi-layered and musical. ​​Yun Wang’s forthcoming poetry collection, The Book of Mirrors, takes the reader on a journey of enlightenment through unexpected discoveries and heartbreaks. Her manuscript was the winner of the twenty-sixth White Pine Press Poetry Prize–judged by Jennifer Kwon Dobbs. The collection is set to release on September, 28, 2021.

The virtual reading will be held via zoom and hosted by author David St. John.

White Pine Press is a non-profit literary publisher, established in 1973, which publishes poetry, fiction, essays, and literature in translation from around the world. For the past thirty years they have been at the forefront in bringing the rich diversity of world literature to the English-speaking audience. White Pine Press seeks to enrich literary heritage; to promote the cultural awareness, understanding, and respect so vital in a rapidly changing world; and to address complex social and human rights issues through literature.

Christopher Merrill has published seven collections of poetry, including Watch Fire, for which he received the Lavan Younger Poets Award from the Academy of American Poets; many edited volumes and translations; and six books of nonfiction, among them, Only the Nails Remain: Scenes from the Balkan Wars, Things of the Hidden God: Journey to the Holy Mountain, The Tree of the Doves: Ceremony, Expedition, War, and Self-Portrait with Dogwood. His writings have been translated into nearly forty languages; his journalism appears widely; his honors include a Chevalier des Arts et des Lettres from the French government, numerous translation awards, and fellowships from the John Simon Guggenheim Memorial and Ingram Merrill Foundations. As director of the International Writing Program at the University of Iowa since 2000, Merrill has conducted cultural diplomacy missions to more than fifty countries. He served on the U.S. National Commission for UNESCO from 2011-2018, and in April 2012 President Barack Obama appointed him to the National Council on the Humanities.

Dennis Maloney is a poet and translator. A number of volumes of his own poetry have been published including The Map Is Not the Territory, Just Enough, and Listening to Tao Yuan Ming. A bilingual German/English volume, Empty Cup was published in Germany in 2017. Recent collections include The Things I Notice Now and The Faces of Guan Yin. He is also the editor and publisher of the widely respected White Pine Press in Buffalo, NY.

Gail Wronsky is the author, coauthor, or translator of 16 books of poetry and prose. Under the Capsized Boat We Fly, New & Selected Poems was published in 2021 by White Pine Press. Her translation of Alicia Partnoy’s book Fuegos Florales (Flowering Fires) won the American Book Prize from Settlement House Press. The recipient of an Artists Fellowship from the California Arts Council, her poems have appeared in Poetry, Boston Review, Antioch Review, Denver Quarterly, Volt, Guesthouse, and other journals. She teaches creative writing and women’s literature at Loyola Marymount University in Los Angeles where she was awarded the Harry M. Daum Professorship. She is currently working on an art/poetry project with Los Angeles artist Gronk.

​​Yun Wang is the author of poetry books The Book of Mirrors (Winner of the Twenty-Sixth White Pine Press Poetry Prize, 2021), The Book of Totality (Salmon Poetry Press, 2015), and The Book of Jade (Winner of the 15th Nicholas Roerich Poetry Prize, Story Line Press, 2002), as well as the book of translation, Dreaming of Fallen Blossoms: Tune Poems of Su Dong-Po (White Pine Press, 2019). Wang is a cosmologist at California Institute of Technology, currently focusing on developing NASA space missions to explore the Universe.