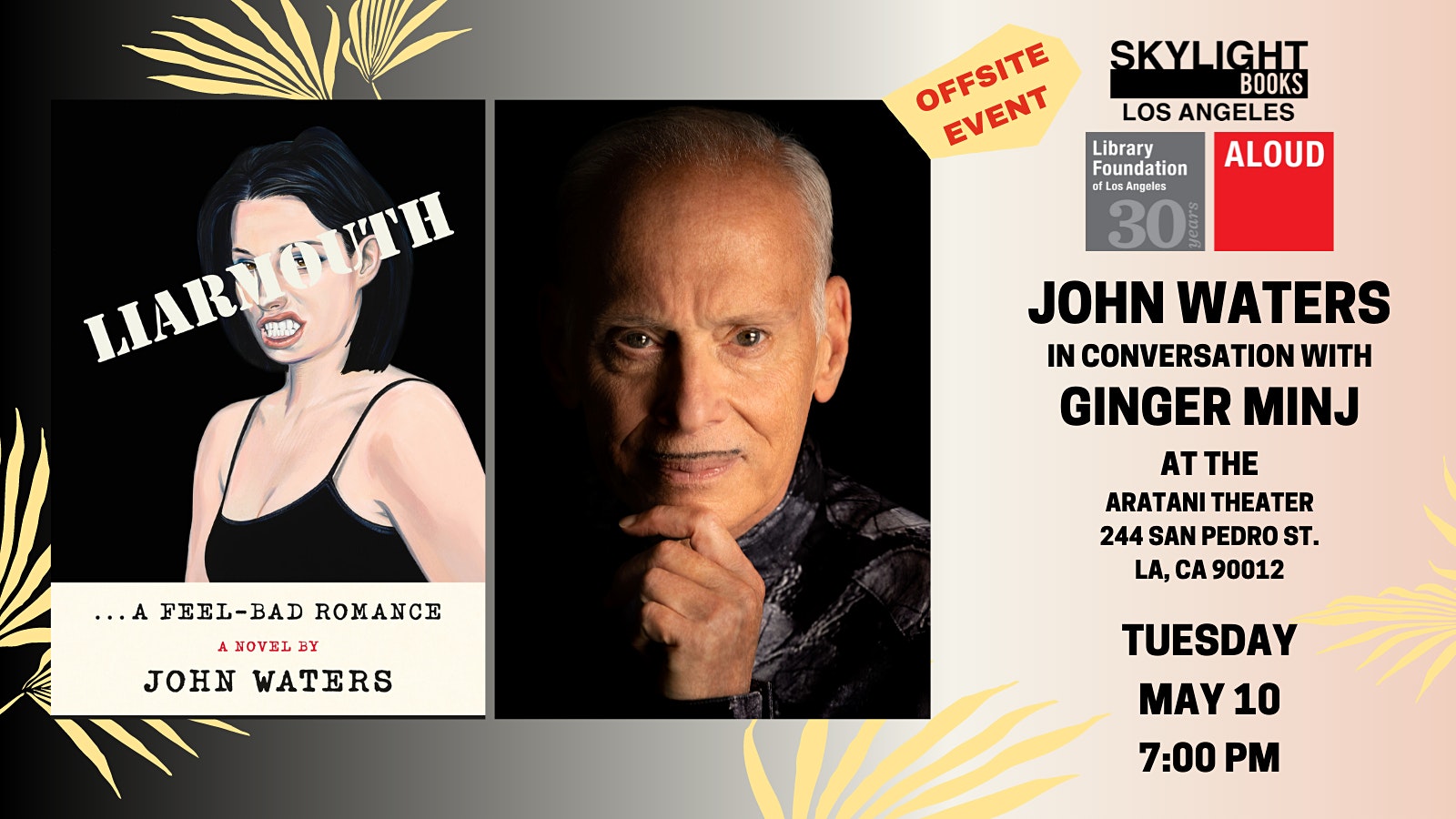 JOHN WATERS in conversation about his novel LIARMOUTH, presented by Skylight Books and ALOUD at the Aratani Theatre at 7:00 PM!

Ticket price includes a copy of Liarmouth and access to the in-person event at the Aratani Theatre, located at 244 SAN PEDRO ST. LOS ANGELES, CA 90012.

In conversation with TBD!

A hilariously filthy tale of sex, crime, and family dysfunction from the brilliantly twisted mind of John Waters, the legendary filmmaker and bestselling author of Mr. Know-It-All.

Marsha Sprinkle: Suitcase thief. Scammer. Master of disguise. Dogs and children hate her. Her own family wants her dead. She’s smart, she’s desperate, she’s disturbed, and she’s on the run with a big chip on her shoulder. They call her “Liarmouth”—until one insane man makes her tell the truth.

John Waters’s first novel, Liarmouth, is a perfectly perverted “feel-bad romance,” and the reader will thrill to hop aboard this delirious road trip of riotous revenge.

John Waters is a writer, a film director, an actor, and a visual artist best known for his films, including Hairspray, Pink Flamingos, and Serial Mom. He is the author of the national bestsellers Role Models, Carsick, and Mr. Know-It-All. Liarmouth is his first novel. His spoken-word shows This Filthy World, False Negative, and A John Waters Christmas continue to be performed around the world. He lives in Baltimore, Maryland.

“I couldn’t put it down, like a bomb singing me a lullaby. For fans of John’s movies, this will be a delicious treat. And for the boring people who don’t know what’s up, good luck. Marsha is probably the funniest villain I’ve ever read, and I was cheering for her the whole way through. Like all of John’s work, this was true comedy, he has ransacked culture for its absurdity, violence and lunacy, and yet somehow I am happier to be here after going along for the ride.” —Ottessa Moshfegh, author of My Year of Rest and Relaxation

“Nasty, violent, and obscene? Over-the-top, ricocheting, and hilarious? All of the above describe the self-described Pope of Trash and Filth Elder’s first novel . . . misadventures are absurd, vulgar, bloody, comic, and weirdly sweet as devilish Waters keeps the pedal to the metal . . . and slyly advocates for acceptance and love.” —Donna Seaman, Booklist

“A hilariously sleazy story of a con artist in which the villains are good guys, the good guys are silly, and everybody gets down and dirty . . . it’s a must for fans of high camp.” —Publishers weekly

“The king of campology is back, as gleefully heinous as ever.” —Kirkus Reviews