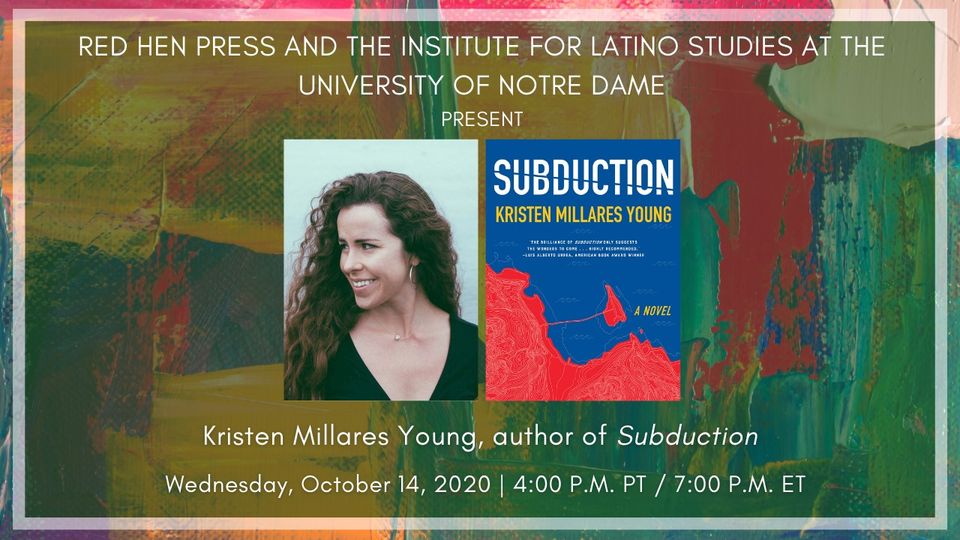 Red Hen Press and the Institute for Latino Studies at the University of Notre Dame present a reading and conversation with Kristen Millares Young, author of SUBDUCTION!
Fleeing the shattered remains of her marriage and treachery by her sister, a Latina anthropologist named Claudia takes refuge in Neah Bay, a Native whaling village on the jagged Pacific coast. Claudia yearns to lose herself to the songs of the tribe and the secrets of a spirited hoarder named Maggie. Instead, she stumbles into Maggie’s prodigal son Peter, who, spurred by his mother’s failing memory, has returned seeking answers to his father’s murder. Claudia helps Peter’s family convey a legacy delayed for decades by that death, but her presence, echoing centuries of fraught contact with indigenous peoples, brings lasting change and real damage. Through the ardent collision of Peter and Claudia, Subduction portrays not only their strange allegiance after grievous losses but also their shared hope of finding solace and community on the Makah Indian Reservation. An intimate tale of stunning betrayals, Subduction bears witness to the power of stories to disrupt—and to heal.

Kristen Millares Young is a prize-winning journalist and essayist whose work appears in the Washington Post, the Guardian and the New York Times, along with the anthologies Pie & Whiskey, a 2017 New York Times New & Notable Book, and Latina Outsiders: Remaking Latina Identity. The current Prose Writer-in-Residence at Hugo House, Kristen was the researcher for the New York Times team that produced “Snow Fall,” which won a Pulitzer Prize. She graduated from Harvard College with an A.B. in history and literature, later earning her MFA from the University of Washington. From 2016 to 2019, Kristen served as board chair of InvestigateWest, a nonprofit news studio she cofounded in Seattle, where she lives with her family.
Purchase SUBDUCTION here: https://shop.aer.io/red_hen_press/cl/Spring_/177349