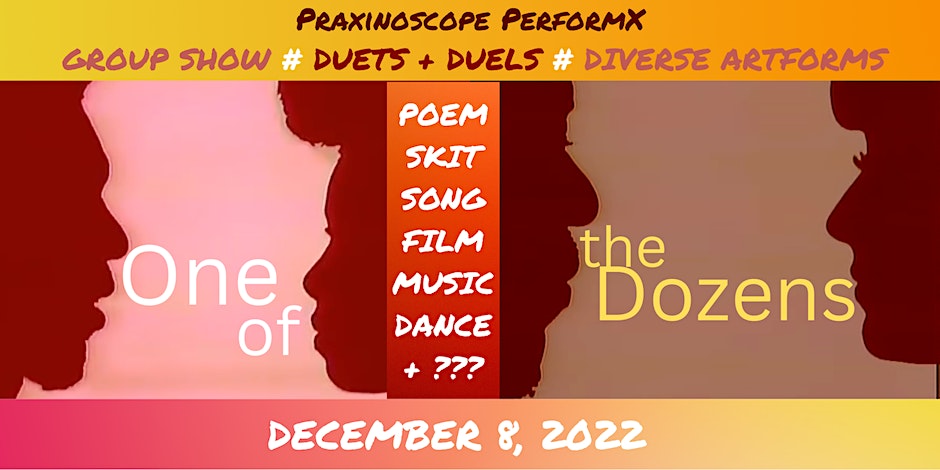 Praxinoscope presents “One of the Dozens,” curating live, interdisciplinary, and group performances

Praxinoscope presents “One of the Dozens” — the fourth and final installment in this ambitious quarterly event series — initiated in 2022 — curating live, interdisciplinary, and group performances.

Each of the Praxinoscope events has featured a curated selection of 12 + artists performing or presenting short works — poetry, song, sound, performance art, video, comedy, plays and dance — each relating in its own unique way to a rotating central theme.

“One of the Dozens” is both a theme and a format for the next PerformX on December 8, 2022 at the renowned center for Los Angeles letters, Beyond Baroque.

Why “The Dozens”? Our inspiration for Duets in public performance arises from “The Dozens.”

The Dozens is a game played between two participants in front of an audience in which the contestants insult or one-up each other in boasts and brags until one of them gives up.

The audience is usually actively engaged by the performers — either directly or indirectly. The onlookers become involved in the contest and call out vocal reactions – jeering, goading, laughing, gasping. The audience response often determines the outcome. Performers are judged by quickness of wit, incisive observations and overall cleverness and craft. Each of the twosome is evaluated by how far each one can push the limits. A perception of obvious cruelty or blunt crudeness may result in one being “booed” off stage in disapproval.

The name “The Dozens” refers to a tradition that arises mostly from African-American cultural traditions but has its analogues in many other cultures. Today, we might know “One of the Dozens” in such popular forms — Rap Battles, Ska Sparring, Voguing Competitions, Street Dance Offs, Capoeira and many other names.

In popular song, there are often back-and-forth interchanges between male and female voices, or characters, often telling different versions of the same story, like Meatloaf and Ellen Foley — “Paradise by the Dashboard Light”; The Human League – “Don’t You Want Me”; and Beyoncé and Jay-Z – “Drunk in Love”.

Artists presenting or performing in “One of the Dozens” will be selected by curators over a month-long process. Artists seeking consideration for inclusion may submit their work to curators by 11.11.22 — https://tinyurl.com/Submit-By-the-Dozen

Livestream: If you can’t join us in-person the event will be livestreamed on Beyond Baroque’s YouTube channel at the scheduled time of the event.

Reservation Policy: Please RSVP if you are planning to attend this event. We accept walk-ins, but priority will be given to people that have registered. Limited seating is available; we recommend arriving early.

This event is Free & In-Person at Beyond Baroque. Masks are required while inside our center.

Event attendees are expected to behave in a respectful and considerate manner while in our space. Beyond Baroque reserves the right to remove individuals from our events, virtual or otherwise, if they are not respecting the space, fellow attendees, or performers.

To get a feel for what “One of the Dozens” may be like, audiences may explore a rich trove of documentation from previous Praxinoscope performances — “Months of the Year” from February 20th and “Signs of the Zodiac” from June 12th.