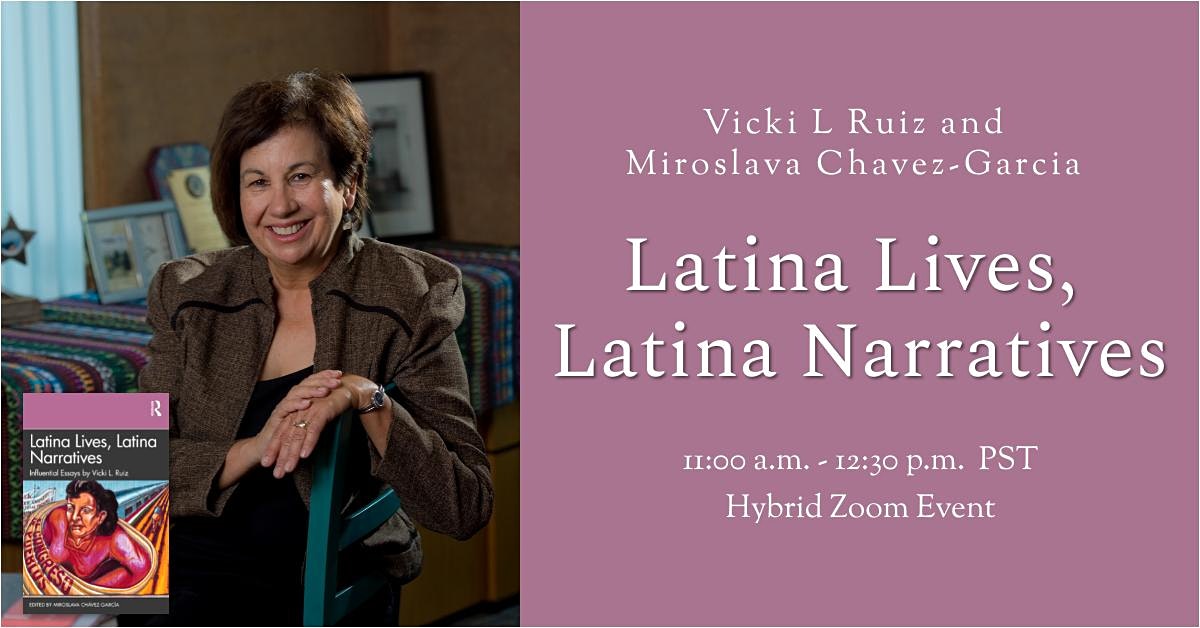 This UCI Illuminations event is an opportunity to learn from the historical writing of distinguished scholar and educator, Vicki L. Ruiz.

This UCI Illuminations event is an opportunity to learn from the historical writing of distinguished scholar and educator, Vicki L. Ruiz.

Event audience members who RSVP for this event will be provided with select essays from Latina Lives, Latina Narratives in advance. This way, they can read essays grounding this event in preparation for their event participation and the event discussion.

Vicki L. Ruiz is Distinguished Professor Emerita of History and Chicano/Latino Studies at the University of California, Irvine. A first generation college-bound student, she received her PhD in History from Stanford University in 1982. An award-winning scholar and educator, she is the author of Cannery Women, Cannery Lives and From Out of the Shadows: Mexican Women in Twentieth- Century America and co-author of Created Equal: A History of the United States. She and Virginia Sánchez Korrol co-edited the three-volume Latinas in the United States: A Historical Encyclopedia, which received a 2007 “Best in Reference” Award from the New York Public Library. Over the course of her career, Ruiz has participated in numerous public history and community engagement programs, including Arizona State’s Hispanic-Mother Daughter Program. From 2007-2012, she served as Dean of the School of Humanities at UC Irvine. In 2012 Professor Ruiz was inducted into the American Academy of Arts and Sciences. Directing twenty-seven dissertations, she has mentored four generations of graduate students from UC Davis, Claremont Graduate School, Arizona State, and UC Irvine. The National Women’s History Project named her a 2015 Honoree in recognition of her scholarship. Ruiz has also received a lifetime achievement award from the Immigration and Ethnic History Association and the OAH Rosenzweig Award for distinguished service. She is past president of the Organization of American Historians and the American Historical Association. On September 10, 2015, she received the National Humanities Medal from President Barack Obama.

Miroslava Chavez-Garcia is a professor in the History Department at UCSB and holds affiliation with the Departments of Chicana/o Studies and Feminist Studies as well as Latin American and Iberian Studies. She also currently serves as the Faculty Director of the McNair Scholars Program. Author of Negotiating Conquest: Gender and Power in California, 1770s to 1880s (University of Arizona Press, 2004) and States of Delinquency: Race and Science in the Making of California’s Juvenile Justice System (University of California Press, 2012), her most recent book, Migrant Longing: Letter Writing across the U.S.-Mexico Borderlands (University of North Carolina Press, 2018), is a history of transnational migration, gender, courtship, and identity as told through more than 300 personal letters exchanged among family members and friends across the U.S.-Mexico borderlands. In 2020, Migrant Longing was named a 2019 Choice Outstanding Academic Title and in 2019 it received the Barbara “Penny” Kanner Award from Western Association of Women’s Historians (WAWH). In 2017, “Migrant Longing, Courtship, and Gendered Identity in the U.S.-Mexico Borderlands,” published by the Western History Quarterly in Summer 2016, received the Judith Lee Ridge from the WAWH. In the same year, that essay was also awarded the Bolton-Cutter Award from the Western History Association for the best article on Spanish Borderlands history.