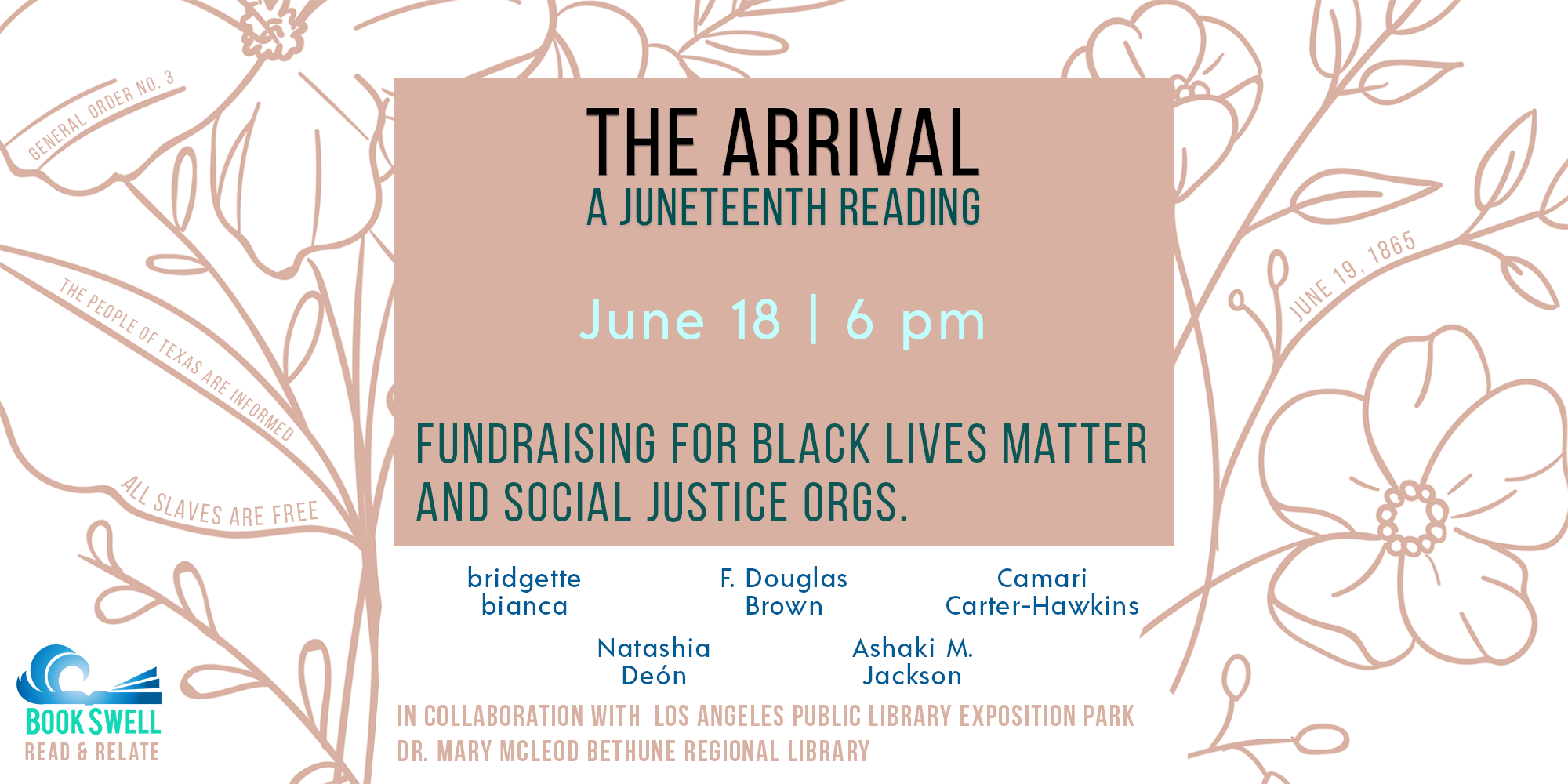 According to the National Museum of African American History & Culture: “Juneteenth marks our country’s second independence day. Though it has long been celebrated among the African American community, it is a history that has been marginalized and still remains largely unknown to the wider public. The legacy of Juneteenth shows the value of deep hope and urgent organizing in uncertain times.”

People across America and around the world are rising up to demand justice because Black lives matter. We are celebrating Juneteenth, its history and its lessons, with poets who’ll share their words with us. At an online gathering featuring bridgette bianca, F. Douglas Brown, Camari Carter-Hawkins, Natashia Deón, and Ashaki M. Jackson, we’ll be raising money for Black Lives Matter LA and other social justice organizations.

The event is free to attend via Zoom, Facebook Live, and YouTube. All proceeds from pay-what-you-will Eventbrite tickets will be dispersed to Black Lives Matter LA. In addition, the organizers will share direct links to donate to a short list of other social justice organizations.

About the BookSwell Read and Relate series

We’ll be using Zoom to conduct the salon and the feed will also be shared via Facebook Live and YouTube. Audio and video may be recorded and re-shared via BookSwell’s social media channels.

Proceeds from donating through the links below will go to Black Lives Matter LA. Contributions are not tax-deductible.

Feeling generous? Consider donating to these organizations as well:

bridgette bianca is a poet and professor from South Central Los Angeles. When she is not sharing her own poetry at venues all around Southern California, she co-curates two literary series, Making Room for Black Women and the Women’s Center for Creative Work Reading Series. be/trouble (Writ Large Press) is her debut collection of poetry.
• website: bridgettebianca.com
• IG: Instagram.com/bridgettebianca
• FB: Facebook.com/bridgettebianca

F. Douglas Brown is the author of two poetry collections, ICON (Writ Large Press, 2018), and Zero to Three (University of Georgia, 2014), winner of the 2013 Cave Canem Poetry Prize selected by US Poet Laureate, Tracy K. Smith. He also co-authored with poet Geffrey Davis, Begotten (URB Books, 2016), a chapbook of poetry as part of the Floodgate Poetry Series. Brown, an educator for over 20 years, currently teaches English and African American Poetry at Loyola High School of Los Angeles, an all-boys Jesuit school. He is both a Cave Canem and Kundiman fellow, and was selected by Poets & Writers as one of their ten notable Debut Poets of 2014. His poems have appeared in the Academy of American Poets, The PBS News Hour, The Virginia Quarterly (VQR), Bat City Review, The Chicago Quarterly Review (CQR), The Southern Humanities Review, The Sugar House Review, Cura Magazine, and Muzzle Magazine. He is co-founder and curator of un::fade::able – The Requiem for Sandra Bland, a quarterly reading series examining restorative justice through poetry as a means to address racism.

Camari Carter-Hawkins is the author of Death by Comb, a stellar body of poetry that seeks to normalize natural hair and find solid ground in an ever-changing world and Write Back to You, a guided journal for writing yourself back into your life. Camari leads journaling workshops all across Los Angeles and beyond. Her poetic works can also be found in Rise: An Anthology of Power and Unity by Vagabond Press and The Best of The Poetry Salon 2013-2018 Anthology. Camari is the 2018 Spoken Word, Voices Heard Women’s Amateur Slam Winner and performs her works nationally. She is the founder of Mama’s Kitchen Press, an anthology press that seeks to publish moments and stories we’ve shared in our mama’s kitchen.
• Instagram: @camaricreative www.instagram.com/CamariCreative
• Website: www.camaricarter.com

Founder of REDEEMED, a non-profit that pairs professional writers with those who have been convicted of crimes, Deón is a practicing criminal attorney, law professor, and creative writing professor at UCLA and Otis College of Art & Design. Deón is the mother of two and is the creator of the popular L.A.-based reading series’ Dirty Laundry Lit and The Table.

Ashaki M. Jackson is the author of two chapter-length books – Surveillance (Writ Large Press) and Language Lesson (Miel). Jackson is an alumna of Cave Canem and VONA. She is co-founder of Women Who Submit and an executive director for The Offing Magazine. Readers can find her work in Prairie Schooner, Obsidian, 7×7 LA and Faultline among other publications. Jackson earned an MFA (creative writing) from Antioch University Los Angeles and a Ph.D. (psychology) from Claremont Graduate University. She lives in Los Angeles.