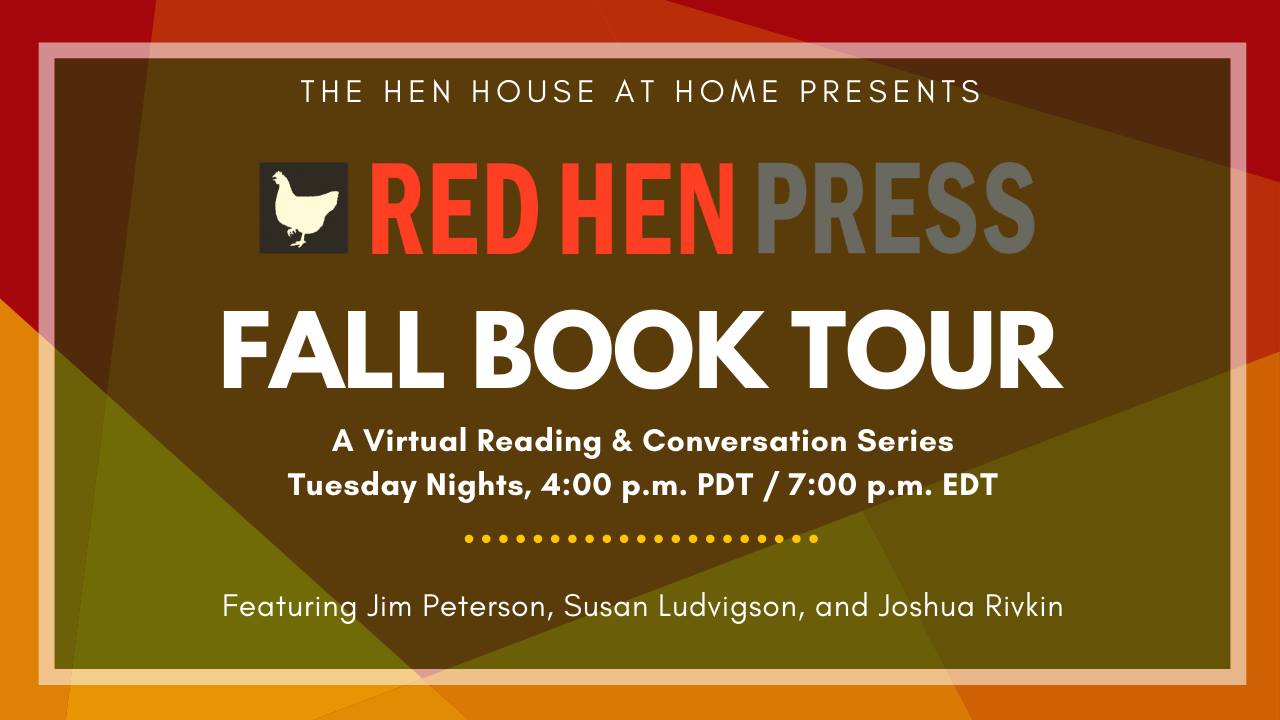 We’re so excited to host a reading and chat with Jim Peterson, author of THE HORSE WHO BEARS ME AWAY, Susan Ludvigson, author of WAVE IF YOU CAN SEE ME, and Joshua Rivkin, SUITOR! Viewable on Facebook.com/redhenpress, redhen.org, redhenpress.org, youtube.com/redhenpressbeats, or linkedin.com/company/red-hen-pressDon’t forget to pick up copies of these books and all books in our Fall season for 30% off using the code “HenHouseAtHome” here: https://shop.aer.io/red…/cl/HHHome_Fall_Book_Tour/217865

Jim Peterson is the author of six collections of poetry, three chapbooks, numerous plays, and a novel, Paper Crown, published by Red Hen Press and recently made available on Audible. His poetry collection The Owning Stone won Red Hen Press’s Benjamin Saltman Award for 1999. His newest collection, Speech Minus Applause, was released by Press 53 in 2019. His poems have appeared widely in journals including Poetry, Georgia Review, Shenandoah, Poetry Northwest, Prairie Schooner, and many others. His stories have appeared in the Los Angeles Review, South Dakota Review, and The Laurel Review. A collection of stories, Many Small Fires, is forthcoming from Red Hen Press. Retired Coordinator of Creative Writing at Randolph College, he is on the faculty of the University of Nebraska-Omaha Low-Res MFA Program in Creative Writing. He lives with his charismatic corgi, Mama Kilya, in Lynchburg, Virginia.
THE HORSE WHO BEARS ME AWAY by Jim Peterson
In the first section of The Horse Who Bears Me Away, “The Fall,” an assortment of characters descend inwardly to the point of personal despair. In the second section, “Anywhere but Omaha,” they begin, with difficulty, to see more clearly who and what they are and to climb their way out of the nadir. In the final section, “Mutation,” the characters embark on a path to transformation—an awakening into a new way of seeing and existing in a world that is constantly testing the validity of their identities. This collection of poems, Peterson’s seventh, challenges readers to consciously embrace the dark side of their American psyche and to reach past it to a new way of being at peace with both the known and the unknown, which is called freedom.

Susan Ludvigson has published ten collections of poems, most with LSU Press. She has received Guggenheim, Rockefeller, NEA, Fulbright, and Witter-Bynner fellowships as well as North and South Carolina Fellowships. She represented the US at writers’ meetings in Belgium, Canada, France, and the former Yugoslavia. Journal publications include the Atlantic Monthly, the Nation, Poetry, Georgia Review, Gettysburg Review, and Five Points. Now Professor Emerita at Winthrop University, she also served as poet-in-residence at the University of South Carolina and Appalachian State University. The Library of Congress recorded a reading of her poems in 1995. She is the former director of the Lena Miles-Wever Todd Poetry series.
WAVE IF YOU CAN SEE ME by Susan Ludvigson
The running theme through the collection Wave as If You Can See Me is the progression of illnesses resulting in the death of the poet’s husband, fiction writer Scott Ely, from the effects of Agent Orange in Vietnam. Interspersed with these poems are her own explorations—in part distraction from the pain of watching her husband’s decline, in part a long-held desire—into painting.

Joshua Rivkin is the author of Chalk: The Art and Erasure of Cy Twombly, a New York Times Book Review editor’s choice and finalist for 2019 PEN/Jacqueline Bograd Weld Award for Biography and the Marfield Prize, the National Award for Arts Writing. His poems and essays have appeared in the New Yorker, Slate, Southern Review, Virginia Quarterly Review, and Best New Poets. A former Fulbright Fellow in Rome, Italy, as well as a Stegner Fellow in poetry, he has received awards and scholarships from the Sustainable Arts Foundation, the Fine Arts Work Center in Provincetown, and the Bread Loaf Writers’ Conference.
SUITOR by Joshua Rivkin
At the heart of Joshua Rivkin’s debut collection Suitor is a profound wrestling with desire, history, and the big questions of how we make and perform a self in the world. In conversation with the confessional tradition, Suitor begins with a sequence of poems about a mother’s boyfriends and lovers, and how these relationships inform the speaker’s own understanding about eros and masculinity. At the center of the book is a lyric essay, “The Haber Problem,” that moves beyond the self and personal history to retell the story of the scientist Fritz Haber. Later sequences and poems reflect on the past with erotic directness, longing, and lyric intensity. With grace and honesty, the poems of Suitor ask what it means to be a suitor in the fullest sense—to follow, to pursue, to chase the inexplicable hunger at the heart of desire.