David Koepp in conversation with Lawrence Kasdan discussing the writing life and his novel, “Aurora.”

discussing the writing life and his new novel, “Aurora.”

Presented in association with the Gloria Kaufman Performing Arts Center

Soon to be a major motion picture from Netflix and Academy Award-winning director Kathryn Bigelow.

From the author of Cold Storage comes a riveting, eerily plausible thriller, told with the menace and flair of Under the Dome or Project Hail Mary, in which a worldwide cataclysm plays out in the lives of one complicated Midwestern family.

David Koepp has written more than two dozen feature films in a wide variety of genres, including the first two Jurassic Park films, Death Becomes Her, Carlito’s Way, The Paper, Mission: Impossible, Spider-Man, Panic Room, War of the Worlds, Angels and Demons, and Inferno. Some of the films he’s both written and directed are Stir of Echoes, Secret Window, Ghost Town, and Premium Rush, the latter two co-written with John Kamps. He is the author of the debut novel Cold Storage (2019) currently in production with Studio Canal Films, and the Audible Originals #1 bestselling story “Yard Work” (2020). He divides his time between Los Angeles and New York.

Lawrence Kasdan has directed, written or produced twenty-four motion pictures, including BODY HEAT, THE BIG CHILL, SILVERADO, THE ACCIDENTAL TOURIST and GRAND CANYON. He has written or co-written six of the most successful films in motion picture history – RAIDERS OF THE LOST ARK, THE EMPIRE STRIKES BACK, RETURN OF THE JEDI, THE BODYGUARD, and STAR WARS: THE FORCE AWAKENS. Nominated for four Academy Awards and six Writers Guild Awards, Kasdan was honored by the Writers Guild of America with its Laurel Award for advancing the literature of motion pictures.  His documentary series LIGHT & MAGIC will appear on Disney+ this year.

“With Aurora, David Koepp has firmly staked his ground as one of the best thriller writers working today. Come for the mind-blowing concept of a massive geomagnetic storm that wipes out nearly every power grid on Earth, stay for why this book truly soars—characters you’ll love, breakneck-pacing, and the question we’re all wrestling with in these wild, modern times: what happens when life slips out of our control?”  — Blake Crouch, New York Times bestselling author of Dark Matter and Recursion

“There’s a reason David Koepp is the most successful screenwriter of all time. It’s because he’s one of the greatest storytellers of all time. Aurora is up there with his best: scary, funny, and thought provoking. Buy it immediately.”  — Scott Frank, writer and director of The Queen’s Gambit

In Aurora, Illinois, Aubrey Wheeler is just trying to get by after her semi-criminal ex-husband split, leaving behind his unruly teenage son.

Then the lights go out—not just in Aurora but across the globe. A solar storm has knocked out power almost everywhere. Suddenly, all problems are local, very local, and Aubrey must assume the mantle of fierce protector of her suburban neighborhood.

Across the country lives Aubrey’s estranged brother, Thom. A fantastically wealthy, neurotically over-prepared Silicon Valley CEO, he plans to ride out the crisis in a gilded desert bunker he built for maximum comfort and security.

But the complicated history between the siblings is far from over, and what feels like the end of the world is just the beginning of several long-overdue reckonings—which not everyone will survive . . .

Aurora is suspenseful storytelling—both large scale and small—at its finest. 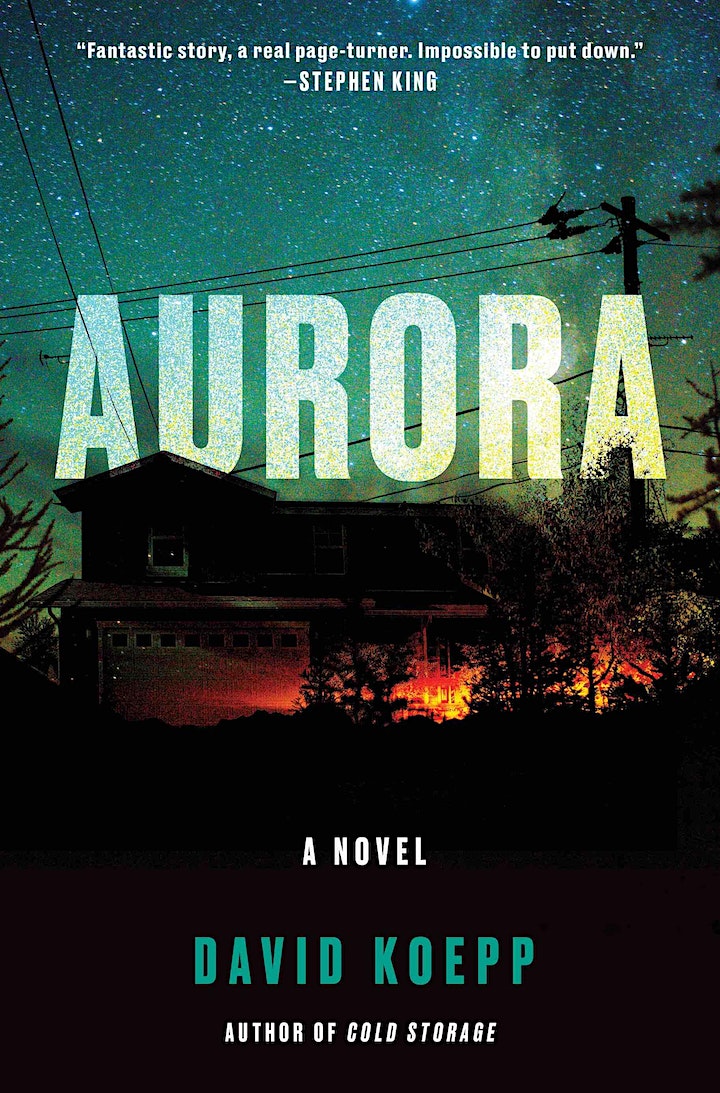