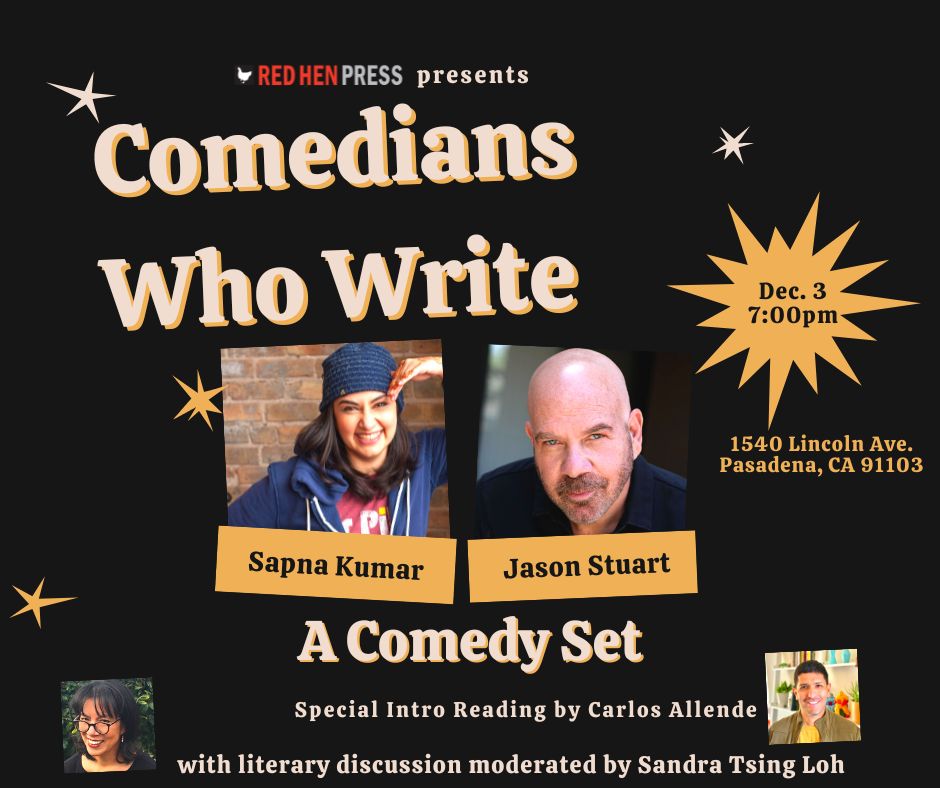 Red Hen Press presents “Comedians Who Write” with Sapna Kumar and Jason Stuart on Saturday, December 3 at 7 p.m. at Red Hen Press’s venue in Pasadena.
These raucous out performers double as authors. Tonight, they will entertain you with their comedy sets and then dish about their private writing lives with moderator Sandra Tsing Loh! You will also get a chance to buy signed copies of their books!

All attendees must be fully vaccinated and boosted and provide proof of such at the door prior to entry. Masks are strongly encouraged when not eating or drinking.

When you think one of the most prolific character actors, who’s also an outrageous openly gay stand-up comedian, one name comes to mind…. Jason Stuart. As an actor he is best known for his major role as a slave owner in The Birth Of A Nation, Recently he won The Indie Series Award For Best Actor In a Comedy Series for his Amazon comedy series on Smothered. Jason also has appeared in the award winning films Tangerine, Love Is Strange, Gia with Kindergarten Cop and Vegas Vacation among his fan favorites. He has wowed TV audiences with guest roles on such shows as Goliath, Swedish Dicks, Love (Judd Apatow), Sleepy Hollow, Real Rob, Entourage, The Closer, It’s Al-ways Sunny in Philadelphia, House, Everybody Hates Chris, George Lopez, Will & Grace, Charmed and as “Dr. Thomas” on My Wife and Kids. As a stand up comic he just won the Worldwide Comedy Award for Best LGBTQ comedian. And you have laughed with him on Gotham Comedy Live, Red Eye, One Night Stand Up, Wisecrack, Comics Unleashed and his own comedy special Making It To The Middle, his new comedy album I’m The Daddy and I Have Candy and autobiography Shut Up, Im Talking! From CCB Publishing.

Sapna Kumar is an LA-based comedian who has been seen on ABC’s “Fresh Off the Boat,” Netflix’s “I Think You Should Leave,” Revry.TV’s “Easy Abby,” and LOGO TV’s “One-Night Stand-Up.” As a writer, she has been published in the magazines Sanskari, Masalazine, riksha, and online in “Eat, Darling, Eat.” Currently, she is working on her memoir, “Curry in a Cornfield,” which tells the haphazard journey of a child raised by raucous, misbehaved Indian immigrant parents in a sleepy, mostly white suburb of Indianapolis, Indiana. In it she writes of her travels, or travails rather: from her first love, coming out as a lesbian, her mental health foibles, her ups and downs as a stand-up comic and actor, to the loss of both of her parents in her early thirties. The reader is enticed to learn why this whiny, colicky adult dares to become a grown-ass woman.