Beyond Spanish: Poetry in Basque, Catalan, Galician, and Spanish 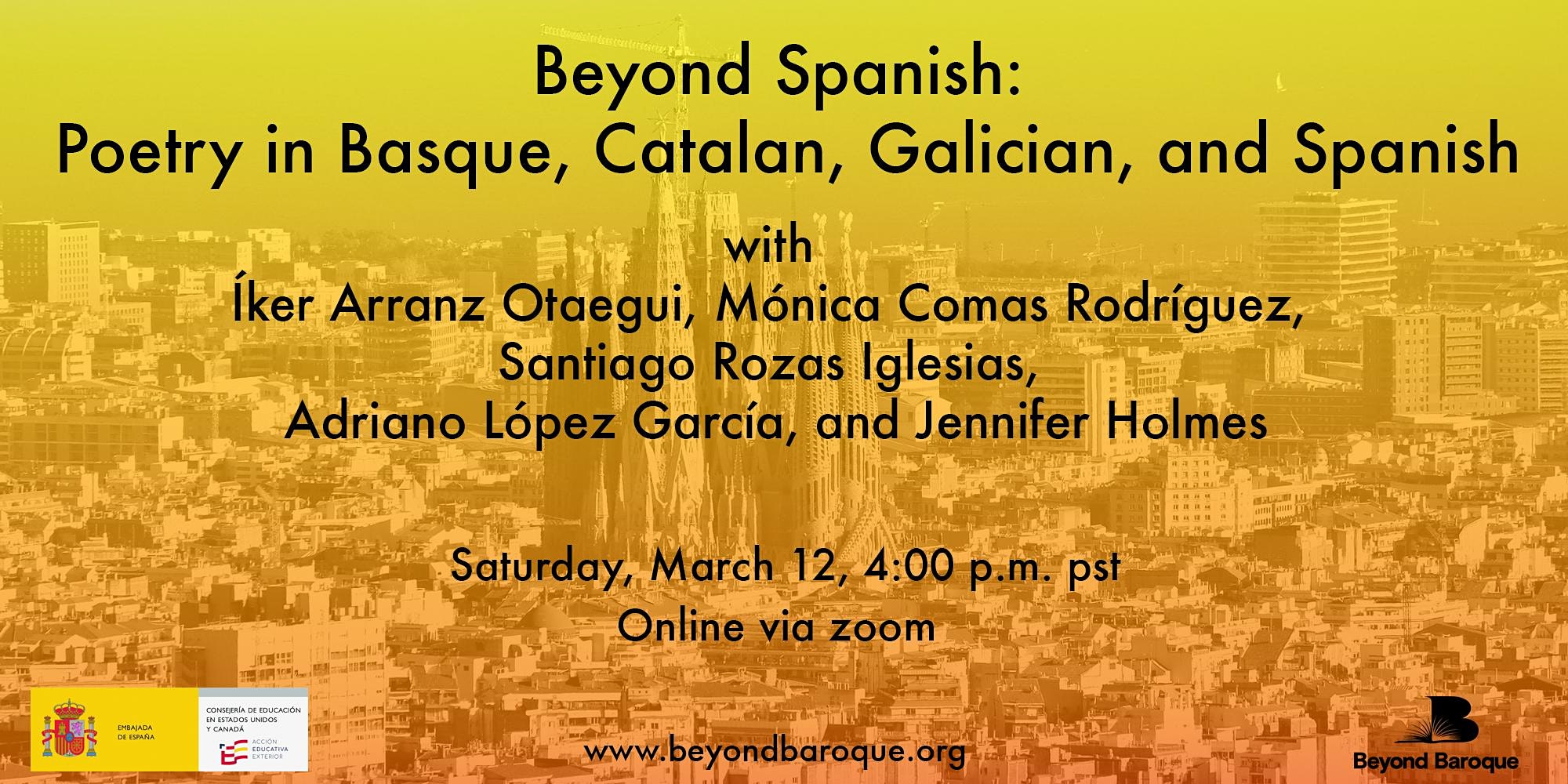 In collaboration with the Education Office, Consulate of Spain in Los Angeles, join us online for an afternoon of poetry in four regional languages of Spain; including Basque, Catalan, Galician, and Spanish. All poems will also be read in English with an introduction by the celebrated author and professor, Mariano Zaro.

Zoom link will be shared 24 hours prior to and on the day of the reading.

Adriano López García was born in Granada, Spain. He is and has been an English as a World Language High School teacher for 23 years. However, 5 of those teaching years were as an International Visiting Techer in Round Rock (TX) and Chicago (IL). He is currently living and working in Los Angeles for the Spain Education Office whose headquarters is in the Embassy of Spain in Washington D.C.

Mónica Comas Rodríguez is currently an education advisor at the Education Office of the Embassy of Spain in Los Angeles. Previously, she worked as a teacher of English and Catalan at several Official Language Schools in Catalonia and in the Balearic Islands, besides working at the Education Department of the Government of the Balearic Islands. Her passion is the education field and the acquisition of languages; thus, she takes advantage of any opportunity to continue learning and enjoying the world of languages and teaching.

Jennifer S. Holmes has directed over sixty works, including Lorca in a Green Dress at the International Theater Festival in Barranquilla, Colombia, and Seeing the Deep, a devised piece inspired by Gilgamesh, at the Leon Katz Rodolphi International Theatre Laboratory in Smolyan, Bulgaria. For six years, Jennifer was the director of the Los Angeles Integrated Arts Program utilizing Los Angeles as a dynamic, experiential teaching laboratory. Jennifer is a professor and Chairs the Department of Theater, Film & Communication Arts, at Whittier College. Jennifer is thrilled to be participating in this iteration of Beyond Spanish at Beyond Baroque.

Santiago Rozas Iglesias was born in Santiago de Compostela, Galicia, Spain. He decided to come to Los Angeles attracted by the “hippie” revolution and after two years back in Spain he came back for good. He has been a “jack-of-all-trades” but just before retiring, he was working as a computer operator for an important oil company as well as a fire-fighter.

Íker Arranz Otaegui is a Faculty Lecturer in California State University, Bakersfield where he teaches a variety of courses in Basque Studies, Iberian Culture and Ethnicity and Culture. He is part of the Modern Languages and Literatures Department, and the Interdisciplinary Program faculty team. Food Studies and literature are areas of special salience in his research, and offer the opportunity to establish an academic recognition for a cultural tradition deeply rooted in the Basque Country, and one that has great appeal for students and also for those beyond the academy. The emergent field of Small Literatures can provide an interesting frame to revisit periphery/marginal cultures. From social to political, or from economy to regional studies, literature and food are disciplines that create a myriad of intersections.

Mariano Zaro is the author of six books of poetry, most recently Decoding Sparrows (What Books Press), finalist of the Housatonic Book Award, and Padre Tierra (Olifante). His poems and short stories have been published in anthologies and literary journals in Spain, Mexico and United States. His translations include Buda en llamas (by Tony Barnstone), and Cómo escribir una canción de amor (by Sholé Wolpé). He is a professor of Spanish at Rio Hondo Community College (Whittier, CA). Website: www.marianozaro.com