Home »Event »As We Breathe: A Black Lives Matter Reading

As We Breathe: A Black Lives Matter Reading 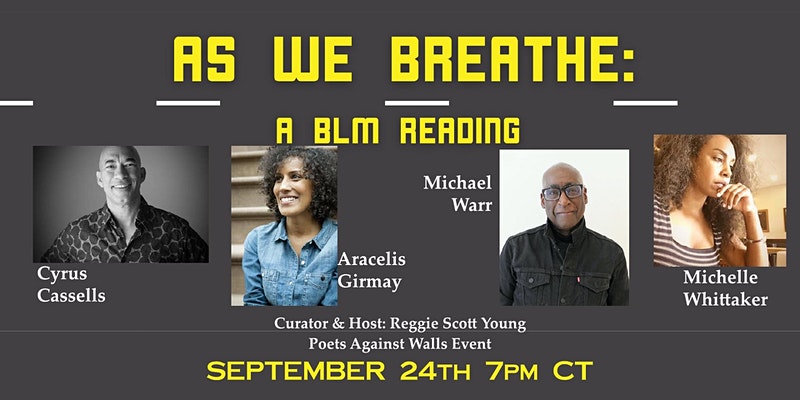 “As We Breathe: A BLM Reading” will be a Zoom Webinar and also livestreamed on Facebook Live, Poets Against Walls page.

A 2019 Guggenheim fellow, Cyrus Cassells has won the National Poetry Series, a Lambda Literary Award, a Lannan Literary Award, two NEA grants, a Pushcart Prize, and the William Carlos Williams Award. His 2018 volume The Gospel according to Wild Indigo was a finalist for the NAACP Image Award and the Balcones Prize. Still Life with Children: Selected Poems of Francesc Parcerisas, translated from the Catalan, was awarded the Texas Institute of Letters’ Soeurette Diehl Fraser Award for Best Translated Book of 2018 and 2019. His 7th book, More Than Watchmen at Daybreak, a lyric cycle about his stay in a desert monastery in northern New Mexico, was published by Nine Mile Books in April 2020. His twin eighth and ninth books, The World That the Shooter Left Us and Is There Room for Another Horse on Your Horse Ranch? (a finalist for the 2019 National Poetry Series) will be published by Four Way Books in early 2022 and 2024. He is a tenured full professor of English at Texas State University.

Aracelis Girmay is the author of three collections of poetry: the black maria (BOA Editions, 2016); Kingdom Animalia (BOA Editions, 2011), winner of the 2011 Isabella Gardner Poetry Award and the GLCA New Writers Award, and a finalist for both the National Book Critics Circle Award and the Hurston/Wright Legacy Award; and Teeth (Curbstone Press, 2007). The recipient of fellowships from Cave Canem, Civitella Ranieri, and the National Endowment for the Arts, Girmay is the winner of a 2015 Whiting Award for Poetry. She teaches in Hampshire College’s School for Interdisciplinary Arts and Drew University’s low-residency MFA program in poetry.

San Francisco poet Michael Warr is the 2020 Berkeley Lifetime Achievement Awardee. His books include Of Poetry & Protest: From Emmett Till to Trayvon Martin (W.W. Norton), The Armageddon of Funk, We Are All The Black Boy, and Power Lines: A Decade of Poetry From Chicago’s Guild Complex. He is a San Francisco Library Laureate and recipient of a Creative Work Fund award for his multimedia project Tracing Poetic Memory, PEN Oakland Josephine Miles Award for Excellence in Literature, Black Caucus of the American Library Association Award, Gwendolyn Brooks Significant Illinois Poets Award, and a National Endowment for the Arts Fellowship. His poetry is translated into Chinese as part of “Two Languages / One Community” a collaborative project with poet and translator Chun Yu. Michael is the former Deputy Director of the Museum of the African Diaspora and a board member of the Friends of the San Francisco Public Library.

Michelle Whittaker is the author of Surge, ( great weather for MEDIA )- a finalist for 2018 Next Generation Indie Award. She has been published in the New York Times Magazine, New Yorker, The Southampton Review, Narrative, Upstreet and other publications. She was awarded a Jody Donohue Poetry Prize, Pushcart Prize Special Mention, Cave Canem Fellowship and a recipient of the 2017 New York Foundation of Arts Fellowship in Poetry

Reggie Scott Young is a native of Chicago’s West Side who has lived in various parts of the country while working as a writer and scholar of African American literature at the University of Louisiana at Lafayette and other universities. He is the author of the poetry collection Yardbirds Squawking at the Moon and his poems, stories, and essays have appeared in African American Review, Fifth Wednesday Journal, Oxford American, riverSedge, and other publications. He currently lives in San Antonio.