An Evening with Steve Case 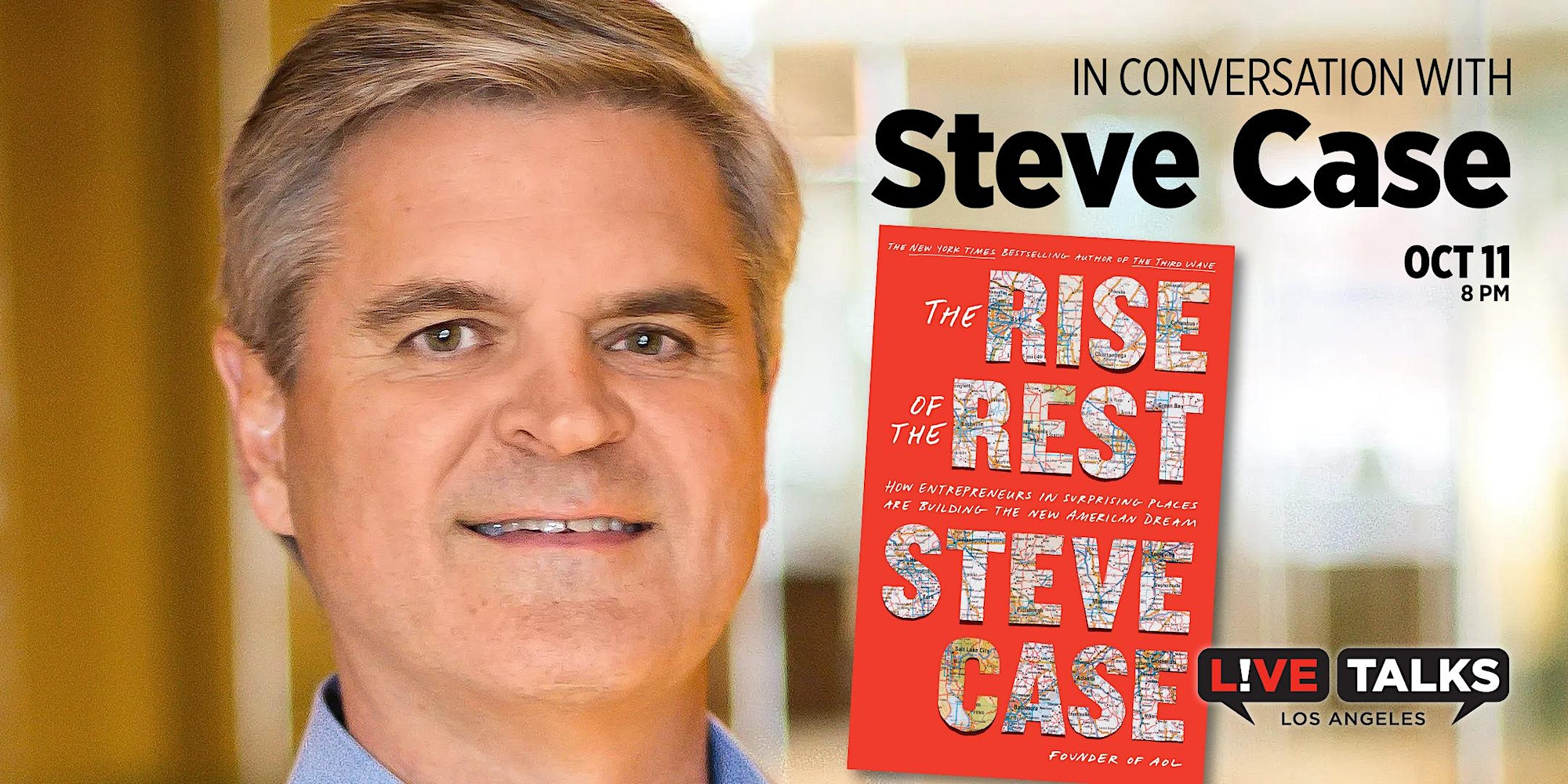 An Evening with Steve Case, “The Rise of the Rest:  How Entrepreneurs in Surprising Places are Building the New American Dream”

An Evening with Steve Case

discussing his book, “The Rise of the Rest:  How Entrepreneurs in Surprising Places are Building the New American Dream”

Steve Case, cofounder of America Online and Revolution and New York Times bestselling author of The Third Wave, shows how entrepreneurs across the country are building groundbreaking companies, renewing communities, and creating new jobs—in the process reimagining the American landscape and bringing people together around a shared future.

Steve Case is an entrepreneur, and a pioneer in making the internet part of everyday life. He cofounded America Online in 1985, when just three percent of people were online for an average of just one hour a week. He saw the possibilities of the digital future and built AOL into the largest and most valuable internet company in the 1990s (and the first internet company to go public). He was the founding chair of the Startup America Partnership—an effort launched at the White House in 2011 to accelerate high-growth entrepreneurship in every region of the country. Case also was the founding co-chair of the National Advisory Council on Innovation & Entrepreneurship, and a member of President Obama’s Council on Jobs and Competitiveness, where he chaired the subcommittee on entrepreneurship.  As chairman and CEO of Revolution, a Washington, DC-based investment firm he cofounded in 2005, Case partners with visionary entrepreneurs to build businesses such as Zipcar, Sweetgreen, Clear, Tempus, DraftKings, and many others. Case also serves as chair of the Smithsonian Institution, which under his leadership has launched a bold effort to make the best of the Smithsonian available to every home and classroom. He is also Chairman of the Case Foundation, and with his wife Jean was among the first to commit to The Giving Pledge, dedicating a majority of their wealth to charitable causes.

In 2014, Steve Case launched Revolution’s Rise of the Rest, an initiative to accelerate the growth of tech startups across the country. Rise of the Rest is based on a simple idea: cities can be renewed and rise again if they develop a vibrant startup culture. Case believes that great entrepreneurs can be found anywhere, and can thrive with the proper support and investment. In fact, they’re key to the American DNA. After all, America itself was a startup. It struggled to get going and almost didn’t make it. Today it’s the leader of the free world, in part because it has the world’s largest economy—a testament to several generations of pioneering entrepreneurs. But America needs help keeping its promises, as it is harder today for innovators who live outside the major tech hubs. For most of the past decade, seventy-five percent of venture capital has gone to just three states—California, New York, and Massachusetts—while the forty-seven states making up the rest of the country have been forced to share the remaining twenty-five percent. And it’s even harder for some people no matter where they live. Less than ten percent of venture capital currently goes to female founders, and less than one percent to Black founders. Since new companies—startups—are responsible for net new job creation, it is essential that entrepreneurs everywhere have the opportunity to start and scale companies. Rise of the Rest is about leveling the playing field for everybody, and in the process creating opportunity and jobs for the people and places that have been left behind. This book tells that story and provides a hopeful perspective on the future of America.

In The Rise of the Rest: How Entrepreneurs in Surprising Places are Building the New American Dream, Case takes readers on an exhilarating journey into the startup communities that are transforming cities nationwide. Rise of the Rest’s signature road trips, on a big red tour bus, have created significant local and national buzz and spotlighted communities large and small that have committed to a new tech-enabled future. Along the way, Case introduces readers to dozens of entrepreneurs whose inspirational stories of struggle and achievement match the most iconic examples of American invention.

To date, Case has traveled to forty-three cities on his Rise of the Rest bus tour and has been featured on 60 Minutes, and in The New York Times, USA TODAY, Fast Company, and The Wall Street Journal. With dedicated venture funds, backed by an iconic group of investors, executives, and entrepreneurs including Jeff Bezos, Eric Schmidt, Meg Whitman, John Doerr, Sara Blakely, and Ray Dalio, Rise of the Rest also invests in the most promising high-growth startups located anywhere in the US outside of Silicon Valley, New York City, and Boston. The fund has invested in more than 175 companies across more than eighty cities, including: Phoenix, Chattanooga, Chicago, Denver, Detroit, Louisville, Baltimore, Columbus, St. Louis, Green Bay, Madison, Buffalo, Kansas City, Minneapolis, Cincinnati, Miami, Dallas, Salt Lake City, Omaha, Atlanta, Pittsburgh, Nashville, Indianapolis, New Orleans, and dozens of others. 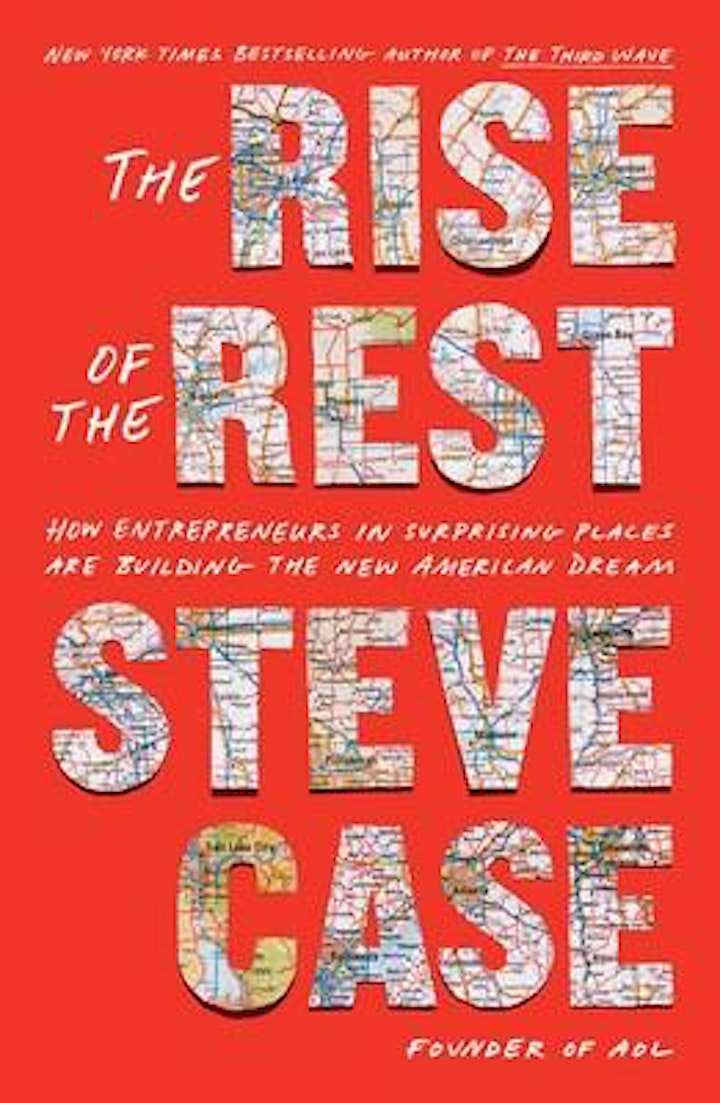