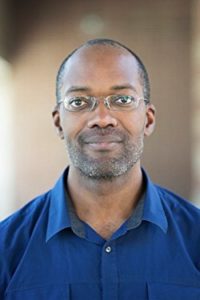 Clifford V. Johnson, Professor of Physics at the University of Southern California, gives many public lectures about his research and appears often in television documentaries as an expert. He has been science advisor for several movies and television series, including Marvel’s Thor: Ragnarok and the National Geographic Channel’s Genius.

Johnson’s research concerns the origin and evolution of the Universe and its fundamental constituents. He works mainly on superstring theory, quantum gravity, and M-theory, studying objects such as black holes and D-branes, using various techniques from Mathematics and Physics to address issues of relevance to particle physics, cosmology and astrophysics. Johnson’s work has also led to new descriptions of physics relevant to the quark-gluon plasma, and various quantum critical phenomena in condensed matter physics. 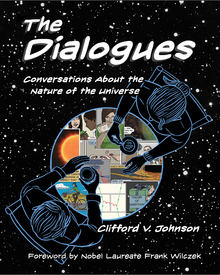 Physicist Clifford Johnson thinks that we should have more conversations about science. Science should be on our daily conversation menu, along with topics like politics, books, sports, or the latest prestige cable drama. Conversations about science, he tells us, shouldn’t be left to the experts. In The Dialogues, Johnson invites us to eavesdrop on a series of nine conversations, in graphic-novel form—written and drawn by Johnson—about “the nature of the universe.” The conversations take place all over the world, in museums, on trains, in restaurants, in what may or may not be Freud’s favorite coffeehouse. The conversationalists are men, women, children, experts, and amateur science buffs. The topics of their conversations range from the science of cooking to the multiverse and string theory. The graphic form is especially suited for physics; one drawing can show what it would take many words to explain.

“This is a fantastic book—entertaining, informative, enjoyable, and thought-provoking.” —A. Zee, Kavil Institute for Theoretical Physics, University of California, Santa Barbara; author of Fearful Symmetry and Quantum Field Theory in a Nutshell

A reading and conversation with M. G. Lord followed by a signing

Part of the “All Space Considered” show: Clifford V. Johnson in conversation with Laura Danly (curator of Griffith Observatory) followed by a signing

“This USC physicist wants you to talk about science. His new graphic novel can get you started” by Deborah Netburn in The LA Times

“The Dialogues: Illustrated Conversations About the Most Thrilling Frontiers of Science by Theoretical Physicist and Self-Taught Artist Clifford Johnson” by Maria Popova in BrainPickings