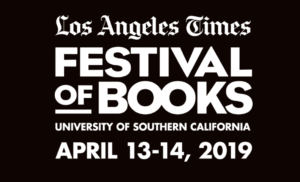 Since 1996, The Los Angeles Times Festival of Books has become a world renowned experience gathering writers, poets, artists, filmmakers, musicians and emerging storytellers like no other. Today over 150,000 people attend, making it the largest festival of its kind in the United States.

BookSwell will be in attendance on the USC campus. Will you? Check out our Events Navigator for more on LATFOB events, and please note that some events require tickets. Ticket reservations open April 7 and it’s advised to book early.

LOS ANGELES: THE PEOPLE AND PLACES THAT SHAPED A CITY

10:00 AM @ Taper Hall 101, Signing Area 5: Anyone who still believes that Los Angeles is a city without history hasn’t been doing much reading lately. Join Lili Anolik, Tosh Berman, Lynell George and David Kipen for a discussion of the key figures and iconic locations that formed their most recent books and the rich history of the City of Angels.

IDENTITY AND MEMORY: THE PERFORMANCE OF THE SELF IN CONTEMPORARY POETRY

10:00 AM @ Mudd Hall 203, Signing Area 1: Join Jos Charles, Terrance Hayes, Illya Kaminsky, and Diana Khoi Nguyen for a conversation on excavating the self as a subject for their poetry.

10:30 AM @ Taper Hall 201, Signing Area 5: These teens might have their sexuality figured out, but that’s about the only thing that’s certain in their lives. e.E. Charlton-Trujillo, Amy Spalding and Nic Stone discuss their teen characters’ various dramas, both because of and unrelated to, who they love.

LAURIE HALSE ANDERSON, AUTHOR OF “SHOUT,” AND ROXANE GAY, EDITOR OF “NOT THAT BAD: DISPATCHES FROM RAPE CULTURE,” IN CONVERSATION WITH ROBIN ABCARIAN

JERICHO BROWN READING FROM “THE TRADITION” 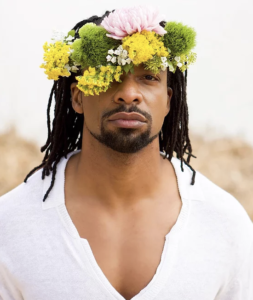 11:00 @ Poetry Stage, Signing Area 2: Jericho Brown is the recipient of a Whiting Writers’ Award and fellowships from the John Simon Guggenheim Foundation, the Radcliffe Institute for Advanced Study at Harvard University, and the National Endowment for the Arts. Brown’s first book, “Please,” won the American Book Award. His second book, “The New Testament,” won the Anisfield-Wolf Book Award and was named one of the best of the year by Library Journal, Coldfront, and the Academy of American Poets. He is also the author of the collection “The Tradition.” His poems have appeared in Buzzfeed, The Nation, The New York Times, The New Yorker, The New Republic, Time, and The Pushcart Prize Anthology, and several volumes of The Best American Poetry anthologies. He is an associate professor and the director of the Creative Writing Program at Emory University in Atlanta.

12:00 PM @ Wallis Annenberg Hall Presented by USC, Signing Area 10: From 2007 to 2017, Los Angeles–based magazine make/shift published some of the most inspiring feminist voices of the decade on issues like immigration, climate change, prison abolition, and more. The new anthology Feminisms in Motion: Voices for Justice, Liberation, and Transformation documents 10 years of make/shift. Angela Y. Davis calls it “a historical record of significant antiracist feminist interventions and a roadmap for moving us in the direction of freedom and justice.” This lively reunion of Feminisms in Motion co-editors and writers will highlight ten years of intersectional feminist thought and action.

TOMMY ORANGE, AUTHOR OF “THERE THERE,” IN CONVERSATION WITH NATASHIA DEÓN

SET ME FREE: NOVELS OF WAR, INTERNMENT, AND ENSLAVEMENT

2:30 PM @ Seeley G. Mudd 124, Signing Area 4: In their most recent novels, authors Esi Edugyan, Christian Kiefer and Crystal Hana Kim wrestle with some of the deepest traumas that one can experience, and examine the character of people living in the echoes of those struggles.

WRITING ACROSS GENRES: WHAT IT MEANS TO BE BLACK IN AMERICA

3:00 PM @ Town & Gown, Signing Area 1: Whether they’re writing poetry, fiction or memoir, these writers  reveal in their works something essential about the experience of being Black in America today. Join Morgan Parker, Nafissa Thompson-Spires and Damon Young in a discussion of their latest books.

4:00 PM @ Taper Hall 101, Signing Area 5: Each of these authors writes in a different genre, but all of their work reveals something essential about the Native American experience. Join them for a conversation about their most recent books and how their experiences mirror one another. 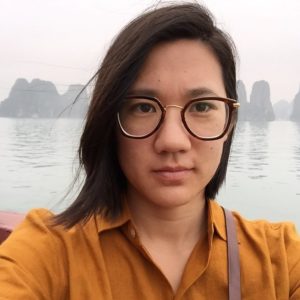 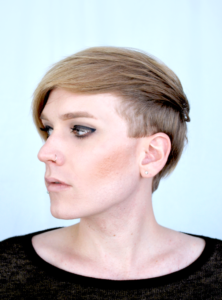 is a trans poet, translator, editor, and author of “feeld,” a National Book Award long-listed finalist and winner of the 2017 National Poetry Series, selected by Fady Joudah (Milkweed Editions) and Safe Space (Ahsahta Press). Charles has poetry published with POETRY, Poem-a-Day, PEN, Washington Square Review, Denver Quarterly, Action Yes, The Feminist Wire, and elsewhere. Charles’ writing has been featured on BitchMedia, Entropy, GLAAD, LAMBDA Literary, and elsewhere. Jos Charles has an MFA from the University of Arizona and is a PhD student at UC Irvine.

LAILA LALAMI, AUTHOR OF “THE OTHER AMERICANS,” IN CONVERSATION WITH CAROLINA A. MIRANDA

10:30 AM @ Town & Gown, Signing Area 1: Laila Lalami, author of “The Other Americans,” and Luis Alberto Urrea, author of “The House of Broken Angels,” discuss their highly acclaimed novels with L.A. Times writer Carolina A. Miranda.

Moderated by: Carolina A. Miranda

11:00 AM @ Taper Hall 101, Signing Area 5: The characters in these panelists’ YA novels  approach serious struggles with extraordinary resilience. Join Elizabeth Acevedo, Meg Medina and Ibi Zoboi for a conversation about crafting teen characters we can all look up to. 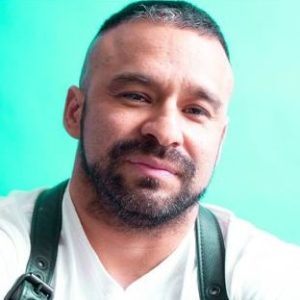 11:40 AM @ Poetry Stage, Signing Area 2: Joe Jiménez is the author of “The Possibilities of Mud” and “Bloodline,” a young adult novel. Jiménez is the recipient of the 2016 Letras Latinas/ Red Hen Press Poetry Prize and holds an MFA in Creative Writing from Antioch University Los Angeles. The short film “El Abuelo,” based on Jiménez’s poem, has been screened in Belgium, the Netherlands, Mexico, France, Argentina, Ireland, England, and the US. He lives in San Antonio, Texas, and is a member of the Macondo Workshops. His newest collection is “Rattlesnake Allegory.”

MEMOIR: VOICES OF THE BLACK EXPERIENCE

12:00 PM @ Town & Gown, Signing Area 1: Kiese Laymon, Casey Gerald and Bridgett Davis gather to discuss their most recent memoirs, all of which wrestle with the realities of African American identity in the cultural landscape of the last few decades.

12:30 PM @ Seeley G. Mudd 124, Signing Area: California is such a gigantic, sprawling state that novels that explore it can be wildly different and vividly accurate at the same time. Join Vanessa Hua, Susan Straight, Nina Revoyr and Lydia Kiesling for a discussion of their varied fictional Californias and the characters that inhabit their lands.

SAM SAX, READING FROM “BURY IT” 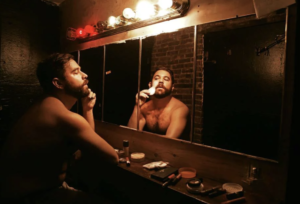 1:00 PM @ Poetry Stage, Signing Area 2: sam sax is the author of the poetry collections “bury it,” winner of the James Laughlin Award, and “madness,” winner of the National Poetry Series, selected by Terrance Hayes, and four chapbooks. He earned a BA from Oberlin College and an MFA in poetry from the University of Texas at Austin. He has received fellowships from the National Endowment for the Arts, Lambda Literary, and the MacDowell Colony. sax is a two-time Bay Area Grand Slam Champion, and winner of the Gulf Coast Prize, the Iowa Review Award, and the American Literary Award. His poems have appeared in BuzzFeed, the New York Times, Poetry magazine, Tin House, and other journals. sax serves as poetry editor of BOAAT Press. In 2018, sax was awarded a Ruth Lilly and Dorothy Sargent Rosenberg Poetry Fellowship from the Poetry Foundation. He is currently a Wallace Stegner Fellow at Stanford University.

2:30 PM @ Hoffman Hall, Signing Area 1: There are as many ways to reckon with queer identity as there are queer people in the world. Join Anuradha Bhagwati, T. Kira Madden, James Oseland and Jacob Tobia for a discussion of their coming-of-age memoirs that are familiar in their parallels and inclusive in their diversity.

Booth 043: Los Angeles Review of Books is a nonprofit organization dedicated to promoting and disseminating rigorous, incisive, and engaging writing on every aspect of literature, culture, and the arts.

Booth 75: Not a Cult is a publishing and media platform that creates beautiful publications focused on cultural and societal discourses.

Booth 119: Angel City Press is dedicated to the publication of high-quality nonfiction books that showcase the history and culture of Southern California.

Booth 141: Dreamspinner Press publishes extraordinary fiction with a focus on LGBTQ+ authors, satisfying the diverse needs of every reader.

Booth 235: PEN America stands at the intersection of literature and human rights to protect free expression in the United States and worldwide.

Booth 835: Made in L.A. Writers features local authors who write fiction about L.A.