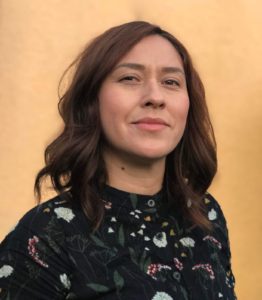 Claudia D. Hernández is a poet, editor, translator, and bilingual educator, born and raised in Guatemala. She holds an MFA in creative writing from Antioch University Los Angeles, and writes in Spanish and English, and sometimes weaves in Poqomchiʼ, an indigenous language of her Mayan heritage. Hernández is the editor of the anthology Women, Mujeres, Ixoq: Revolutionary Visions (Conocimientos Press 2017), and the founder of the ongoing photography project Today’s Revolutionary Women of Color. She currently resides in Los Angeles. 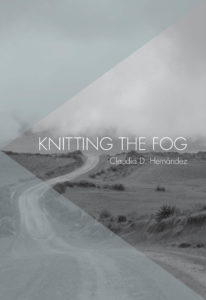 A young Guatemalan immigrant’s adolescence is shaped by her journey to the United States as she grapples with Chapina tradition and American culture. Claudia D. Hernández weaves together narrative essay and bilingual poetry in her Louise Meriwether First Book Prize-winning debut, Knitting the Fog!

Seven-year-old Claudia wakes up one day to find her mother gone, having left for the United States to flee domestic abuse and pursue economic prosperity. Claudia and her two older sisters are taken in by their great aunt and their grandmother, their father no longer in the picture. Three years later, her mother returns for her daughters, and the family begins the month-long journey to El Norte. But in Los Angeles, Claudia has trouble assimilating: she doesn’t speak English, and her Spanish sticks out as “weird” in their primarily Mexican neighborhood. When her family returns to Guatemala years later, she is startled to find she no longer belongs there either.

A harrowing story told with the candid innocence of childhood, Hernández’s memoir depicts a complex self-portrait of the struggle and resilience inherent to immigration today. (From Feminist Press)

“In Knitting the Fog, Hernández eloquently captures the hardship, joy, magic, and resilience of three generations of women enduring ‘the battles of this dream’—border after border—from the family home in Mayuelas, Guatemala, through the desert across the Río Bravo, to the streets of Los Angeles. Magnificent!” —Carol Potter, author of Some Slow Bees

“Knitting the Fog brings us the immigrant experience in a refreshingly new light. This memoir of hybrid forms—moving evocatively between poetry and prose—is not only timely but resonant in [its] sense of place and purpose. How exciting that Hernández’s voice joins the canon of contemporary Latina stories.” —Bridgett M. Davis, author of The World According to Fannie Davis

“This debut is so much more than an immigrant’s story. It is an ode to the resilience of the human spirit. A hymn to the power of poems and stories as agents of personal liberation and social change. In any language. Any culture. Anywhere in the world. ¡Brava, Claudia! ¡Otra, otra! Encore!” —Lucha Corpi, author of Confessions of a Book Burner: Personal Essays and Stories

“Claudia D. Hernández knits together so much in this necessary, unforgettable book—poetry and prose, Guatemala and El Norte, Spanish and English, innocence and awakening—blurring borders with humor and heartache and the richest, most vivid detail. Hernandez’s harrowing yet joy-laced journey will knit its way deeply into your heart.” —Gayle Brandeis, author of The Art of Misdiagnosis: Surviving My Mother’s Suicide